By name and by nature, ‘Colossus’ opens proceedings and is quickly followed by ‘Never Fight a Man with a Perm’. Immediately, band and crowd are one. And the crowd moves. Side to side. Back and forth. Up and down. In and out. Round and round. Very quickly, peak sweat level is accomplished, sustained from belligerent beginning to emotional end. The sage advice of ‘Mother’ – ‘The best way to scare a Tory is to read and get rich’ – is followed by the vitriol of ‘Faith in the City’, the fuck you defiance of ‘I’m Scum’, the bollocks-to-boundaries of ‘Danny Nedelko’ – with Danny himself appearing aside Joe Talbot – and not once does the energy of band-and-crowd-as-one abate.

One political diatribe after another, each track is broken Britain at its most punch-me-in-the-face-and-I’ll-get-up-to-be-hit-again resilience. With a stage invasion during ‘Exeter’ dealt with by security (very professionally, I hasten to add), when IDLES invite the crowd on stage for the closer ‘Rottweiler’, there’s little security can do except look after them (and, again, so they do). Pounding drums and feedback filling the room, while we lose sight of the band among the throng of onstage fans, one guitar-brandishing girl finds herself atop the shoulders of another fan. The lights go up and everyone is united. This isn’t an invasion. Nor is it chaos. And neither is it a pool poisoned by those that the right wing media would tell us shouldn’t be welcomed. This is harmony. Unity.

In these turbulent and uncertain times, it would appear that that most want somebody to blame for all of their frustrations, their anxieties, their failures, and responsibility usually falls at the feet of immigrants or the underclass. According to, in Talbot’s words, the “psychopaths” that run the country anyway. Believe the immigrant blaming if you want. Believe the making and breaking of the underclass too. Believe the fuck-them-and-let-them-be-homeless hype. Embody the I’m-so-much-a-man-it-fucking-hurts myth. Ignore the ever-widening class division that fucks you over day after day. Believe it all if you want. Just keep calm and carry on. But here, all are welcome to bring and sing their song. If, as their second album title says, we are to consider joy as an act of resistance, then every heartbroken, joy-filled soul in here tonight – and, indeed, every other venue visited by the band – is the embodiment of that fight. Keep calm and carry on? Fuck off. 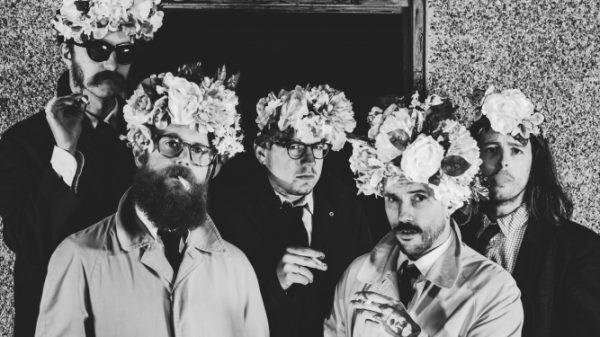