If you follow any of these musicians on social media, you will have heard the news about a new super group being formed through Frontier Records: Iconic. The name couldn’t be a better fit: it is exactly what it says on the tin!

Formed by truly iconic musicians, the band features two current members of Whitesnake: Joel Hoekstra (also in TSO and Joel Hoekstra’s 13) and Tommy Aldridge (also known from working with Ozzy Osbourne and Ted Nugent), as well as Marco Mendoza (Thin Lizzy, Black Star Riders, Dead Daisies, Journey), Nathan James of Inglorious and Michael Sweet (Stryper). It therefore comes as no surprise that with such a stellar cast, the results were instantaneous: their first ever single ‘Nowhere To Run’ made it on air on Planet Rock pretty much as soon as it got released. I don’t remember having witnessed such a head spinning debut before!

The band is gathering quite a following already and the response to their three singles so far is fantastic. None of this is a fluke, as they are not a random bunch of famous folks. They are all extremely talented guys who have put together an amazing classical set which, as much as being 100 percent original content, could be described as the modern day equivalent of Whitesnake. Put in the context of David Coverdale’s imminent retirement after his current Farewell Tour, things are becoming really rather interesting to follow.

The closeness in style to Whitesnake is also to be expected, with Joel sharing the songwriting with Michael, and it comes to remind us of the circle of life: while some monsters of rock come close to retiring, the younger generations take their legacy on, so rock music of the 70’s is just having a bit of a revamp but if very much alive and kicking.

Right from the very start of the CD, the straight to the point intro may make you wonder whether what follows is a cover version of “Bad Boys” – a guess that will swiftly be dismissed, as you come to realise that there are two main vocalists on this track which; a) makes it so much more powerful than normal, but also b) clearly draws a line to say that this is no imitation of Whitesnake, but an insanely talented band in its own rights, just as brilliant as Coverdale’s. Or perhaps even taking it up a notch, as we are no longer in the 80’s and things need freshening up to keep the passion going.

Comparisons with Whitesnake can be made until the cows come home, but differences can be found, too, which makes it an intriguing release to listen through, engaging your brain as much as your musical sensors. Halfway through the song “Second Skin”, an immaculately composed modern day classic, you nearly expect Coverdale to join in with “When you’re crying in the rain”. “Nowhere To Run”, on the other hand, from its very first notes makes you wonder: ohh have Whitesnake released a new track? But, yet, this is simply inevitable, given the band line-up and Joel’s signature style. More tracks in the style of good old Whitesnake are “All About”, “This Way” (reminding me so much of “Here I Go Again”), and “Ready For Your Love” (well, seriously, just the title itself screams Whitesnake!).

The choice of main singer is also very interesting, as he fits the vocal profile of David Coverdale and his possible replacement Dino Jelusick, thus making the music of Iconic sound perhaps a bit closer to Whitesnake than may have been intended.

Having said all this, by no means this album is a repetition or imitation of Coverdale’s rock heritage. While relying on the same audience and fan base, Iconic has so much to offer: brilliant compositions, explosive melodies and energy, immaculate instrumentation (and ah, that guitar of Joel’s to die for!), one of the greatest honed young vocals, and between all members of the band – a huge arsenal of professional experience and maturity that, frankly, some other super bands could be a bit envious of.

A particular heart throb for me is “All I Need”: the compulsory power ballad, bringing out a different side to Nathan’s vocal talent to remind us that not only has he got some seriously powerful pipes but can also sing his heart out and deliver heartfelt emotions – in a way that only the biggest of the biggest do (think Russell Allen).

Iconic can be totally proud of what they have done, so let’s keep our fingers crossed that they will somehow manage to coordinate their busy schedules at some point to put together a few gigs: now wouldn’t that be awesome! And until then, head over to https://orcd.co/secondskin and order yourself this gem of an album! 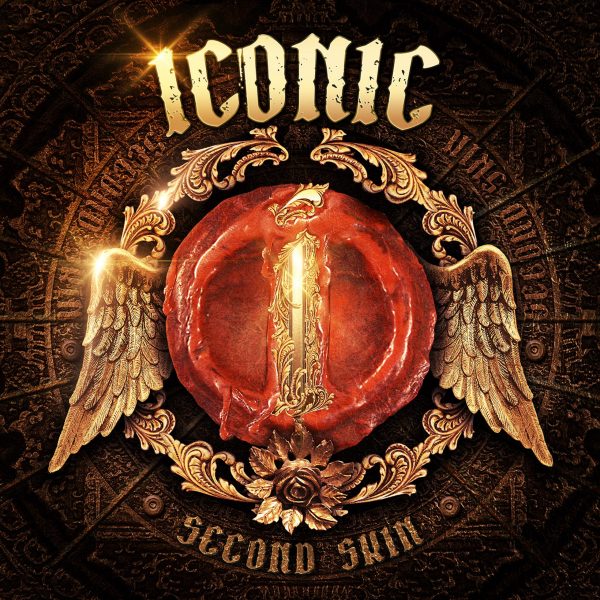