During The Great Lockdowns, a lot of bands arranged streaming events, a welcome diversion for the audience and a much needed source of income for many musicians. With a relaxation of at least some of the restrictions on public events on the horizon, the Steelmill, alongside Better Than Live, began to organise hybrid events, still streamed, but with a small, appropriately socially distanced audience. The second of these doubled as a launch party for Iconic Eye’s new EP, their first recordings with new singer Janey Smith.

Personally, walking into a venue for the first time in however many months it’s been was in some ways a slightly surreal experience. For those who know the venue, the floor was divided into pens, one for each individual party, and a one-way system was in place for moving around the venue. Meanwhile the stage had been moved to the sidewall, which made it into a much wider, but shorter venue, which enabled more pens to be accommodated. The stage itself looked really impressive, with a fine lighting rig, a screen at the back of the stage and two more screens either side.

The whole event was compered by Gary Foster from WCR-FM and first up were Black Country Rock Godz, Willenhall’s Bestest Band 2017, or so the back screen informed us, THE SHORT HEATH BOYZ. Under the circumstances, and accepting the fact that actually being at a live gig again was an experience in itself, it seems wrong to try to do any critical review of the bands, but The Boyz were a good choice to kick things off. The temptation for some will be to dismiss them as a comedy band, but that would be a mistake, as these guys are a really entertaining band, and would probably take a festival crowd by storm, especially if the bars were open, and outsiders could get to grips with the Black Country references. Their sound lies somewhere between Motorhead and Slade, not a bad place to be, and the tone is set by their cover of the Steppenwolf classic early in the set, although renamed ‘Born To Drink Mild’, and with slightly ‘rearranged’ lyrics. They have their own stuff, too, including the mighty ‘Willenhall Bird’, ’Oh Bab’ and the intriguingly titled ‘Wob wibble wibble’. If you get the chance to see them, take your sense of humour with you, and enjoy.

Stafford’s own NAKED SUNDAY are a more serious proposition, led by vocalist and guitarist Martin Stanyer. The band have supported the likes of Molly Hatchet, Pretty Boy Floyd and the Darkness, but their sound is a lot more diverse than that might suggest, and they’re quite a difficult band to pin down. There are definitely touches of Cheap Trick about some of their stuff, although I was just as impressed with the bluesy ‘Tales of Creeping Death’, and even more by the brooding, almost Gothic menace of ‘You Cannot See Me’. 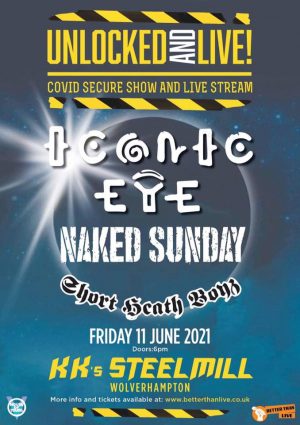 They may be an acquired taste for some, not least because of Martin Stanyer’s highly individual voice. The band work really hard on stage, it was good to see bassist Laura Stanyer often using the full width of the stage, and Martin has his own brand of showmanship, including playing his guitar behind his head. There’s something about this band, and it will be interesting to see where they go in the future.

I’m not sure if it’s the new blood in the blood, but there was definitely an air of confidence about ICONIC EYE when they began their set. They hit their marks straight away, and it wasn’t long before Janey Smith looked as if she’s been in the band for years rather than this being her first gig. She hit some big notes in ‘Better Place’ quite early in the set to set the bar, and throughout the whole set gave us more than enough evidence to suggest that she’s going to be a real asset to the band. The first release from the new line up is an EP, ‘Back From Behind The Sun’, and all five songs from it were included in the set, including the title track, augmented by flame throwers across the front of the stage, the excellent ‘Have My Day’, and a cover of Starship’s ‘Jane’, which was the first song played in the encore.

The band were clearly having a great time being back playing to an audience, no matter how restricted it was, and this came across in the set. ‘Don’t Stop Me From Leaving’ really took off in this setting, and ‘All She Needed’ was another highlight. They even earned an encore, including ‘I Can Feel It’ and ‘Jane’, which had a burst of streamer bombs to bring the show to a satisfying end.

As a return to gig going in the Covid era, this was a pretty decent way to get back in the swing. While the restrictions did feel onerous at first, when the bands started you were able to forget about the distancing and lose yourself in the music, and all credit to the bands and to the Steelmill and their staff, for putting the show on, overcoming all the obstacles and making it such a worthwhile and enjoyable night. It was so good to have live music back.