Play loud and sing along, unashamedly…

The Javelins was Ian Gillan’s first band back in the early ‘60s. They played clubs in West London, but never recorded. Back at the tail end of the last century Gillan made a few calls and got back in contact with rhythm guitarist Tony Tacon, bass player Tony Whitfield, drummer Keith Roach and lead guitarist Gordon Fairminer and they recorded a series of rock ‘n’ roll covers for posterity under the title Sole Agency & Representation.

I presumed this to be a re-release but in fact it’s an all new set of covers – Songs the original band featured in their set back in the day. Rock ’n’ roll, pop and rhythm & blues by way of the British skiffle movement, there were a thousand bands just like them up and down the country, but only one of The Javelins turned this music malarkey into a career. Still, listening to this, the rest of the guys weren’t so bad, and they’ve polished their chops too.

Gillan has described this record as “a collection of catchy rhythms and feel-good melodies”. It’s true, but there is still a sense of apprehension on the listener’s part that what we will hear are weary predictable numbers dance bands churn out at social clubs every weekend. However, there’s solid playing throughout, and some creative touches that add individual personality here and there, more importantly Ian Gillan sings well, often from the heart; kindling old memories in some cases probably.

The spoken word intro over sturdy rhythm guitar while a little melodramatic for ‘Do You Love Me’ simply pre-empts the obvious fun The Javelins had playing this number. Roach delivers classic drum rolls that steer us into sing along choruses and there’s an atmospheric fulsome flow as Gillan ouzzes out his vocal juices. Too often in interviews these days he comes across acting too seriously as an elder statesman of rock and for those who pledged allegiance in their own youth by wearing his patch on their denim jacket, once in a while they need reminding why. I can report he sounds in rude health, and as he sings the title’s high notes, you buy into the song quite warmly.

Pretty much throughout there’s breadth and weight to his voice, fine phrasing and articulation to his words, and some underused but venerable vocal rock clichés are duly given token service too. With some of these old chestnuts part of you will think of that old Morecambe & Wise TV slip where they’re dancing around miming to The Ladybirds’ vocals while Tom Jones pours on the suited macho look, but that’s okay too. Case in point ‘Dream Baby (How Long Must I Dream)’ where there are in fact added female backing singers and a horn section (unless that’s guest keyboard player Don Airey working his magic).

Similarly, ‘Memphis, Tennessee’ sets off at a sweet gentle trot rather than a gallop edging, with Fairminer inserting some effective arpeggios. It’s a little country and western flavoured too, as is the slower riding ‘Chains’. Both ‘High School Confidential’ and ‘Rock And Roll Music’ see tempos pick up, aided and abetted by some piano plonking R ’n’ B. The former features some able guitar filigrees dancing around, the latter notable for Gillan characterisation of its narrative. ‘Mona (I Need You Baby)’ applies itself to Bo Diddley syncopation while ‘You’re Gonna Ruin Me Baby’ is a smooth cruising boogie with Gillan on harmonica weaving in and out of an extended piano solo and sliding lead guitar. All pleasant enough.

The Javelins also cover two Buddy Holly numbers. On ‘It’s So Easy’ Gillan approximates Holly’s voice well enough although it’s the extended lyrical dancing lead guitar that gives it shape and melody. Alas on ‘Heartbeat’ it sounds far too similar to Nick Berry’s rendition for the 80s TV series for my liking.

More fun is Gillan acting as circus barker over a fairground organ before a fat bassy bossa nova comes in with horns honking away in a manner The Javelins could barely have dreamed about back in the day for ‘Little Egypt (Ying-Yang)’. The sexual innuendo is perfect for Gillan band era fans, moving along as it does like some slightly sleazy stripper rock. Whereas ‘Save The Last Dance For Me’ comes across sincere and poignant, Gillan articulate in his phrasing as this song is given a big ballad workout, with a brief snatch of dreamy solo guitar.

There are some pleasant surprises too. Notably ‘Another Saturday Night’. I’d previously considered this nmber by The Drifters pure schmaltz wrapped in cotton. Here it has a sturdy blues upbeat and Gillan inhabits it like some bruiser docker bent on spending every last penny in his back pocket on booze, broads and possibly a little bottle of diet pills to keep him awake all night. Phrases like “Chick” also stand out weirdly wonderfully profound and daring in this snowflake world.

Better still is ‘Smokestack Lightning’.  Airey’s piano tinkles ominously like Atomic Rooster’s Vincent Crane and both guitarists edge from The Shadows influence of the early 60s into the proto-metal that the power of Marshall stacks and effects pedals promised. Then when the harmonica falls in alongside the piano we’re wading through the swamps and bubbling, crackling guitar effects take up the primeval riff like it’s some monster’s about to come out and grab us. This is a Sonny Boy Williamson II number that The Yardbirds made their own and The Javelins take a hefty stab at. Had Jimmy Page and Peter Grant not trundled down to The Midlands back in 68 but poached Gillan from The Javelins this is how Led Zeppelin I might have turned out.

As the 4 to the floor riff of ‘Hallelujah I Love Here So’ starts up I’m hoping for more of the same. And, while it’s not the mighty blues and pale ale blitzkrieg rendition Humble Pie immortalised on their classic Rocking The Fillmore it’s a great song and the band rock out strong with Gillan surprising again with how well his voice suits the R ‘n’ B gospel ravings of Ray Charles. A little later they also give ‘What I’d Say’ a run for its money. There’s an extended keyboard intro with funky piano solos and horns blasting away – It’s perfect video material for go-go girl dancers shaking their thing. Again, Gillan phrases, sighs, hollers and screams giving 110% vocally.

As I age I learn to rejoice in the rebellion of all those who have performed the Daddy dance ahead of me – Our final rite of passage before we old rockers head out to Valhalla.

This is the result of five days recording in Hamburg. It’s neither camp nor dipped on postmodern irony. Most of the songs stand the test of time, so they could be forgiven sounding like nothing more than pub cabaret; the fact remains however they have a light airy touch about them that offers just enough character to let Ian Gillan prove he really can sing, man. Play loud and sing along, unashamedly. It ain’t wild and woolly but it might entertain you. 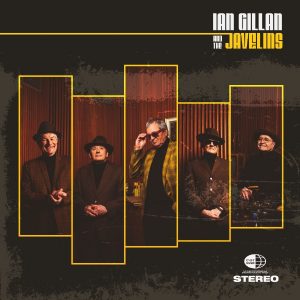