Pivotal in the formation of the classic Fairport Convention sound Iain Matthews’ musical legacy spreads far and wide (so much so that he’s appeared on over 100 albums). Recorded back in 1991 Live At The Bonington Theatre found him teaming up with compatriot Andy Roberts to deliver a set that perfectly highlights both of their unique talents.

Iain and Andy first played together in Plainsong back in ’72 before parting ways. A chance encounter found them reuniting and their alchemy fused a magic that seeps through every note of this 11-track album. Written in tribute to Hank Williams ‘A Wailing Goodbye’ is an introduction that’s full of lovely folky flourishes and finds Iain and Andy displaying an obvious chemistry which ensures they fit together like hand in glove. Their duality becomes apparent on an acapella version of Jules Shear’s ‘On Squirrel Hill’, originally appearing on Iain’s Walking A Changing Line album it was originally garnished with electronics so it’s nice to hear it parred back and stripped bare which has the added benefit of bringing their sublime harmonies to the fore.

Live At The Bonington Theatre pulls it’s folk influences from the world’s four corners and ‘Back Of The Bus’ delivers a taste of Americana. It’s a song that almost breathes as it ululates and skips along on waves of effervescence as it wraps a serious message inside a seriously addictive tune. Likewise, ‘Yo-Yo Man’ seems to emanate from the Deep South; it’s a lively rendition with plenty of blues inflections and bounces from speaker to speaker like a box full of frogs. As you’d expect from two seasoned musicians the set contained here ebbs and flows perfectly and ‘I Don’t Wanna Talk About It’ injects a change of pace. Previously recorded by Iain (and later massacred by Rod Stewart) ‘I Don’t Wanna…’ is performed here as originally intended: it’s fuller and reveals a lyrical depth buried by Rod’s schmaltz.

A progressive rock masterpiece by Peter Gabriel is reinterpreted by Iain and Andy and subsequently ‘Mercy Street’ sounds like it could have come from the pen of Simon and Garfunkel. Full of cascading guitars and heart-wrenching vocals it’s a tender track that wraps its tendrils slowly around the listener. ‘Tonight (New Shirt)’ is a lively closer that’s made more explosive by a guest spot from Rick Sanders who artfully scrawls his fiddle all over the track.

Live At The Bonington Theatre is an album that’s far too good to be sitting in the vaults and, as this loving issue by Angel Air testifies, the preceding three decades have only increased its charm. 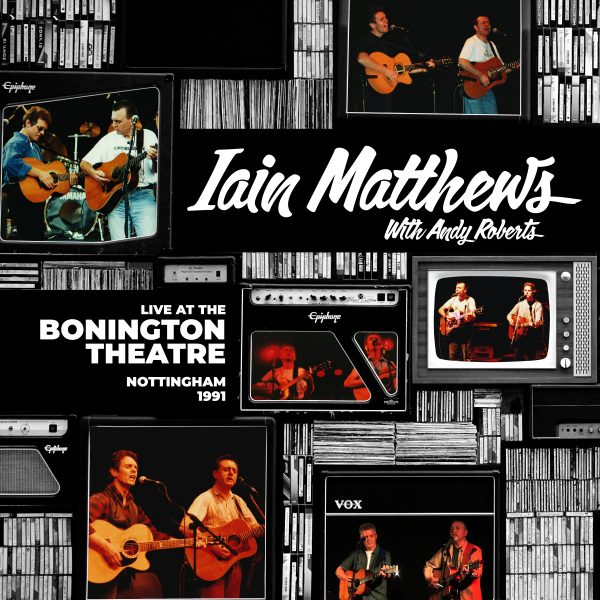