Hyponic are in no hurry. The two piece from Hong Kong have just released this, their third album, hot on the heels of album number two which was recorded, urm…eleven years ago. The music backs up the work rate too, providing the perfect accompaniment to the torpor. Slow, almost ambient funereal drones are very much the order of the day.

The songs follow a fairly similar format – they either boom or fade up into existence. There is a definite post rock edge to the dynamics while the vocals switch between ferocious shrieking or muted, muffled, wordless chanting. Solos and powerchords swirl slowly around each other. Songs fade into the ether or crash, shambolically, to a finish…and then start up again – almost as if they are driving into long, dark, vaguely sinister tunnels.

A melancholy melody underpins everything. Occasional piano merges surprisingly well with the ever present guitar drone. The band are adept at slowly building volume and intensity, working their way towards powerful, moving crescendos, some of which scream and howl for your attention while others just pound away, oblivious to their surroundings.

Track 5 moves like an incoming, moonlit tide. Beautiful calming ambience washes toward you before soporific vocals, wrapped in sonic cotton wool, arrive. Sure enought he guitars appear, rolling in slowly in waves until it all gently fades and eases off into the inky blackness.

The album ends with a punishing Virus cover. The riffs are huge, chugging edifices – becoming ever heavier and faster. The beast awakens and roars, the mood now more menacing than anything that has come previously. And it’s all over relatively quickly – the songs, despite their epic frameworks, are shorter than they feel, there is a brevity to these mini monsters. It is, however, a powerful, cleansing, calming experience. Zen Doom. None more black meditation music. 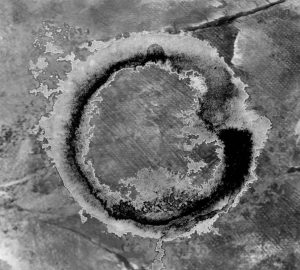