It’s near enough jam-packed here at The Robin tonight. On stage there are three figures decked out in black (pretty much like everyone else in rock ‘n roll these days). The rhythm section is half his age, if not more, but Hugh Cornwell looks in surprisingly good nick.

‘Coming Out Of The Wilderness’ opens the set, as it does his latest album. It’s dry and dusty, but in a good way, evoking a spaghetti western feel, and lyrically those of us who’ve aged less well than the man in black we can still admire its wry unrepentant witticisms.

‘Stuck In Daily Mail Land’ cops something of The Who’s ‘Substitute’ during the verses, whereas the powers chords take us elsewhere, the drummer Windsor McGilvray particularly powerful here he’s very good and is well complimented by bass player Pat Hughes, with a very full band sound delivered from the three-piece as a whole. McGilvray adds backing vocals to ‘Moments Of Madness’, the title track from Cornwell’s new album, and its bright chiming reggae guitar has a crowd shuffling in time where once they might’ve pogoed – Not that this is a hoary old gathering. Frankly most of the more-aged here look like they were probably only handed down older siblings’ Stranglers vinyl. Those sporting spikey or Mohican bonces are few and far between latecomers, and there’s a good proportion of a much younger demographic who’ve no doubt discovered one of punk’s laureate’s for themselves, and from the way they sing along they’re well familiar with his ten years strong solo career.

Following some dirty distorted guitar figuring, ‘Moments Of Madness’ comes to a crunching conclusion, and Cornwell greets his audience; his well-spoken modest approach taking me personally by surprise. Asking how many of them are actually from Bilston, there are few replies and he ponders aloud that the houses out front might be empty and queries what ulterior sinister purpose there might be for them. He tells us the next song is from his Monster album, and about Lou Reed, whom he never had the chance to meet. Cornwell delivers a staid Velvet Underground strum to his guitar as he delivers a matter-of-fact narrative for ‘Mr Leather’, with Hughes adding backing. Having taken a swig from bottled water, he addresses us again, informing us the next one’s from his Beyond Elysian Fields album and it proves a bright and bristling number. It’s during ‘Under Her Spell’ I pick out a secondary sound, and as the evening wears on realise there are infrequent keyboard FX sequences either triggered by Cornwell’s foot pedals or some other technological process beyond my understanding. They’re aural colouring, no more, and as for the lights most changes go unnoticed, and since the band have rarely moved thus far it’s the songs that are entertaining us, as they ought.

There’s something very British, in a conservative with a small c sense, about tonight’s performance. Bluster and outrage may be expressed in song – and in vocal mannerism that I’m only latterly finding comparisons towards Kevin Ayers – but there’s nothing flash and attention seeking about, more an integrity at work here, concerning a body of work. 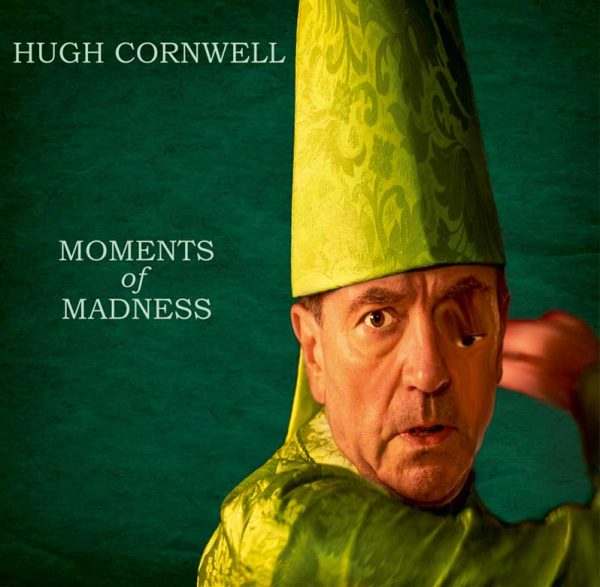 From the same album, is Beauty On The Beach’ wherein Hughes interlaces an impressively gnarled bass solo. Then with a change to white telecaster, Cornwell delineates 50s surf guitar licks, as a sense of menace enters the musical proceedings for new number ‘Beware Of The Doll’. It evokes images of switchblades drawn at night while drag races are screened in slow motion, this nu-bohemian poetry set to music, with solo poured out while some brief bodily movement is witnessed on stage. This is obviously catching, because with next number ‘I Want One Of Those’ Hughes is bopping side-to-side to the briskly chopped number, Cornwell’s guitar arpeggios leading straight into ‘The Most Beautiful Girl In The World’, a soulful rendition with harmonies from the full trio, they follow through with a battered but party-rocking ‘Another Kind Of Love’, sustained notes developing into a rowdy barrage of white noise then a drum solo before guitarist and bass player move centre stage and face each other with syncopated chords chopping their way over ricketty-thrakking bass. A jazzy punk instrumental section follows, a little dub step, the overall effect akin to Robert Fripp jamming over Captain Beefheart, before all three take to their mics.

The rhythm section sets up a Bo Diddley beat, Cornwell clapping and audience following suit as he calls out “If you’re ever down Mexico Way” and we’re offered some ‘Lasagne’. – His voice clear, the lines well amusing. With a rattling chunky beat, ‘When I Was a Young Man’ neatly forms a closed circle with the opening number to end the evening’s first set on.

Free form jazz plays over the PA during the intermission, time to go the bar and reposition one’s self for a second set that’s to be liberally dosed with Stranglers classics… Casually striding back on, the trio again gather in front of the drumkit, and the world weary macabre musical box instrumental that is ‘Waltzinblack’ begins to be played; crouched over to look at fingerings or moving only slightly this lack of any prancing around a disappoint in some acts becomes strangely quite compulsive viewing for me. Horror prog by definition, the crowd greeted its opening bars with applause and multiply that on conclusion, then roar like lions when Hughes begins the bass line to ‘Peaches’ – It’s an interesting take mind, Cornwell’s guitar sound proves soul funked and McGilvray’s drumming seems patterned by Stewart Copeland’s time in The Police, while the whole of The Robin cries out the single version’s edited-out line: “What a bummer!” Cornwell makes with a wall of white noise, his guitar playing extensive and echoed between rockier runs in solo until the song reaches conclusion.

With decisive notes picked out, the trio drive hard, power chords concluding the next number prior to ‘Nice ‘N Sleazy’ hitting us across the head like a prime piece of beef, and it’s followed by more of a similar skin, after which Cornwell exclaims: “What a lot of fun!” into the mic, only for things to chill out a little as ‘Golden Brown’ is sung with deep and powerful intonation with melodious scatting near the end, its guitar solo penetrating the deep vein of this heroin-related number, on what’s been a somewhat Parisian jazz rendition in the main.

Snappy drumming, trebly rocking bass and carefully spaced-out power chords follow familiar tunes I’m too caught up in to define individually, but as the warm croon of ‘Skin Deep’ reaches its end with colourful splashes of guitar, schoolboy memories come flooding back as we gathered round a stereo listening to Rattus Norvegicus and I hear Side 1, Track 2’s ‘Goodbye Toulouse’ for the first time in more years than I care to remember –  A little less rugged with Cornwell’s guitar emitting Syd Barrett styled effects and delivering a truly psychedelic solo.

On a roll, a phenomenal rendition of ‘Five Minutes’ follows – It’s power pop on super-human steroids and one of the night’s highlights for me; a sea of heads bopping before me, my own balding bonce no doubt annoying those behind me, and both Hughes and Cornwell taking a solo within its allotted time. More wild effects, and the echoes of reggae amid razor sharped rock are all heard before Cornwell points towards his rhythm section, naming each of them in turn, and well pleased by the evening reaction, exclaiming: “Wow, Friday night in hard times!” before exiting stage right.

But a few minutes later, he’s back, declaring: “Thank you, you’re too kind!” Bright chords sheen and shimmer in a sensual rhapsody then with all guns blazing ‘It’s Always the Same’ is unleashed – The pretty post-new Romantic version of yesteryear vanished, louder, brasher with keyboard motifs replaced by deep-pinging guitar, only its hook-line chorus safely intact and shouted out by all gathered as they raise their hands in the air and bop their bodies any which they can. This version needs recording.

A cheeky jazz-tipped guitar solo gives way to a big thumping beat, guitars now turned to fuzz as final number, ‘Get A Grip On Yourself’, rampages mightily. Throughout this second set, my mind has reeled back in time, drowning in countless memories, tonight proving music is a power that can keep us going when the chips are down – I’ve no idea in what time frame the peculiar monkey dance that many of the males here have affected to jiggle about to first became a trend, but their emotional investment in this event is so very apparent. As Hugh Cornwell and his band take a bow I vanish into the night, accompanied by an excitable chap from Darlaston who raves about this evening and similar past shows, in the days that follow I will too.