With hits like ‘What Is Love’, ‘Hide And Seek’, ‘Things Can Only Get Better’ and ‘Like To Get To Know You Well’ topping the singles charts and Human Lib and Dream Into Action doing likewise in the album charts Howard Jones was massive in the 80’s. He even took to the stage as part of the global Live Aid concert at Wembley Stadium in 1985. However following this he set his eyes on America and at the tail end of the century he struggled to maintain that success especially on this side of the pond. In The Running was his final album for Warner Bros. and marked a coming of age for the 80’s pop star as he tried to find his way in the new decade. Tracks like ‘Out Of Thin Air’ from 1989’s Cross The Line album had hinted at a more mature approach but with Ross Cullum who had worked with Howard on some of the Cross The Line sessions now becoming a major part of his team co-producing, co-writing and appearing across the album this enabled Howard to have more focus and putting the piano at the heart of the recordings it became his “I’m Still Here” project.

We dive into the first disc of this hefty collection with the main single ‘Lift Me Up’. Howard switching his synth to big saxophone mode still didn’t help him make a dent on the top 50 in the UK (#52) and it fared little better in the States (#32). Not only does this herald a new keyboard approach but vocally he seems to be in a more comfortable range. Despite its limited commercial success it was definitely an upbeat way to start the 90’s. ‘Falling Away’ finds him in reflective mood and includes some wonderful but restrained guitar from Steely Dan’s Dean Parks giving the outro quite a Dire Straits vibe. The next three tracks show the relevance that In The Running still has today covering climate change on ‘Show Me’ where Steve Farris (Mr. Mister/Spooky Tooth) supplies the guitar. ‘The Voices Are Back’ tackles mental health issues with Kevin Robinson’s (Simply Red) smooth trumpet sprinkled throughout before returning to the subject of global warming for ‘Exodus’ with Ritchie Hayward (Little Feat) tapping out the rhythm.

The star studded quests keep coming (Big Country’s Mark Brzezicki appears on drums on a number of tracks) on ‘Tears To Tell’ and ‘Two Souls’ with Robbie McCintosh from The Pretenders and Midge Ure from Ultravox appearing on the respective tracks. Both of these were released as singles in certain territories but once again made little impact. The promo videos for all three singles can be found on the accompanying DVD. Returning to the demons in your head with ‘Gun Turned On The World’ this time Howard studies the anger that moves people towards their dangerous place and the need to calm down and heed advice, pleading “You Never Listen To Me”. Despite the heavy subject matter it is all enclosed inside quite a lighthearted tune.

‘One Last Try’ is Howard’s homage to one of his heroes… Brian Wilson and highlights Jones’s quality as a singer songwriter. Voice and piano are central to this moving track complimented by more sensitive guitar work from Dean Parks. There is also an edited version of this song closing out the bonus tracks at the end of the first disc. Closing the original album is ‘City Song’ based around the “Nowhere” vegetarian restaurant which he opened in New York in 1987 (it burned down within 12 months) and the loneliness felt by people within the big cities. This track builds to a big choral finale before its fade and confirms the maturity that would guarantee Howard Jones’s future within the industry. Disc one is completed with the Donald Fagan cover ‘I.G.Y (What A Beautiful World)’, ‘New Man’ and ‘You Say’ (B-side to ‘Tears To Tell’/’Two Souls’) all taken from The Very Best Of Howard Jones compilation album released in 2003 along with the aforementioned ‘One Last Try’ edit.

Disc two contains the instrumental version of the album and as always with these things some songs work better than others once the vocals are removed. The most successful of this group are ‘One Last Try’, ‘City Song’ and the instrumental take of ‘What Is Love?’. Also on the second disc we get TV mixes of ‘Road To Cairo’ a cover of the David Ackles 1968 track recorded for the Elektra 40th anniversary compilation and ‘Other People Are Us’ another B-side from the ‘Tears To Tell’ single. All of this material is previously unreleased so will be a great addition for any Jones fan.

Disc three brings more rare, live and remixed takes of the album track plus other extras. Strangely the two versions of ‘What Is Love?’ which open on this disc seem the most out of place of this collection harping back to a different era. Rarities include ‘Don’t Be Part Of It’ a song recorded for the 1991 benefit album in aid of “People for the Ethical Treatment of Animals” (PETA) and the extended version of ‘One Last Try’.

As if that wasn’t enough this set also includes a DVD containing over an hours worth of footage the high point being a very absorbing 2020 interview with the man himself. The interview covers the making of the album and its subsequent tour with humorous anecdotes involving getting Don Henley’s grand piano into a small American club as well as a track by track commentary of the original album. You will also find all of the promo videos for the albums singles and tracks performed on BBC’s daytime TV show Pebble Mill.

Once again Cherry Red have pulled together a great range of material to interest fans of all levels. Available in this 3CD/1DVD deluxe expanded version or on 140g translucent vinyl. In The Running may not have been his most successful album but it certainly set a path which enabled him to move on and continue recording and performing to this day. On the whole it shows that he isn’t just a nostalgia act (although he does still make a healthy living on the 80’s circuit) and if all things go to plan Howard will be touring throughout the UK from July including playing an acoustic show with Nick Beggs and Robin Boult at The Union Chapel in Highbury in October. Prepare for Howard Jones… all grown up. 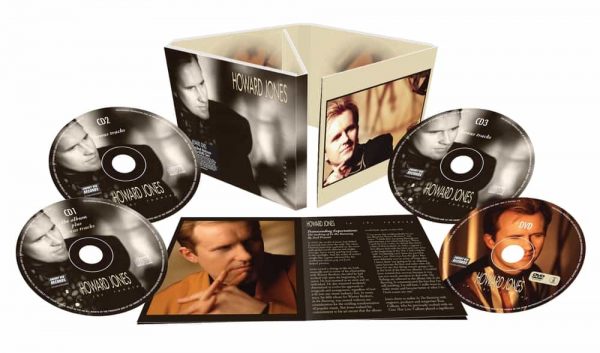