“A long time ago in a galaxy far, far away” the rising star that was John Howard Jones wished that there was some way to display his form of electronic music on the global stage. Unfortunately, the internet was still ten years away so he found his way from his home in High Wycombe to the BBC for his first appearance on The Kid Jensen Show on BBC Radio 1. Whether it be on an in the studio session or performing and recording one of his ever-popular live concerts for the home audience, Howard as he would become known would appear on that national institution on a regular basis over the coming years. Giving the sometimes dark electronic music made popular by Orchestral Manoeuvres In The Dark and Ultravox a real pop twist over the mid 80’s he would shine brightly but briefly. With this five-disc set Cherry Red Records brings together his best BBC recordings in one place for the first time. Featuring 61 tracks including 43 previously unreleased takes on many of his biggest hits as well as some less well-known gems making it a must have for any Jones aficionado.

Disc one and the first half of disc two are taken up by the radio sessions which Jones recorded between 1983 and 1987. The lead in session from March ‘83 really introduced Howard Jones to the world. With the first single ‘New Song’ (featured here) still five months away this Kid Jensen Show features songs written for his debut album Human’s Lib. Three of the tracks would make it onto the final album with ‘’Don’t Put These Curses On Me’ failing to making the cut and eventually being released 2003’s The Very Best Of… compilation. Just two months later Howard was back on the Beeb to appear on the show for a second time, this time the session featured the original demo tape which had been submitted to and rejected by John Peel. Containing early versions of ‘What Is Love?’ simply titled ‘Love?’, unreleased track ‘Risk’ and ‘What Can I Say?’ a track recorded for a local showcase album The Wycombe Compilation. His first session for The Janice Long Show closes disc one taking the listener onto the Dream Into Action era and containing four tracks from that album a couple of months prior to its March release date. Ending the studio sessions section of the set and opening disc two we jump forward to the One To One album (1987) for another appearance on The Janice Long Show. Once again featuring (four) songs from the accompanying album it also includes a rearranged version of ‘Conditioning’ from his debut and a cover of Donald Fagan’s IGY (What A Beautiful World). This final broadcast benefits from an expanded band line-up and the addition of backing vocals really enhances the sound. Despite the unfamiliar studio surroundings that these sessions took place in they are a fascinating insight into the progression which took place between the original demo recordings and the later One To One performances.

Moving on to the real meat and potatoes of this collection for the second half of disc two which finds us in the live arena. First up an “In Concert” recording from The Paris Theatre which goes back to pre-Human’s Lib times. With ‘New Song’ just being released Jones was on a high for this solo performance in front of a London audience. Despite the great audience reaction this solo set doesn’t quite have the impact of the three band performances included however it does show what a talented player Jones had become even at this very early stage of his career and highlights why he has occasionally returned to this stripped-down format today with solo appearances as well as the amazing Jones/Beggs/Boult line-up. Jumping forward just six months on the next disc for a triumphant (almost) hometown gig at the Friars Club (still run by his then manager Dave Stopps) in Aylesbury on my personal favourite concert of this set. With Human’s Lib now released the set list focuses on that long player but also includes ‘Always Asking Questions’ which would go on to appear on the 12” Album as well as ‘Change The Man’ which once again only saw the light of day on The Very Best Of… collection along with two songs from his next album, future #4 hit ‘Like To Get To Know You Well’ and ‘Dreams Of A Better Place’ an early version of the Dreams Into Action title track. The partisan crowd screaming and singing along throughout and the freedom which the band gives Jones allows his charisma to shine through. Who would have thought that just eight months on Jonesmania would hit The Royal Albert Hall as just before Christmas the trio took to that hallowed building to perform a rousing set mixing hits from the debut album along with tracks from the still in the making Dream Into Action. As the screams peak during the obvious high points ‘What Is Love?’ and ‘New Song’ it is still possible to witness the maturity of the songwriting via the more reflective ‘Equality’, new track ‘Hunger For The Flesh’ and closer ‘Hunt The Self’. By the time of the final “In Concert” performance in this set Jones was at the height of his powers and had built up a formidable set for the trio to navigate and this group of songs which is the favourite of the man himself contains the ultimate summary of his career so far with Jones and band at their pinnacle. Stand outs include the darker pop of ‘Automaton’ as well as the alternative piano take on ‘Hide And Seek’. The ironic thing about this set is that it opens and closes with ‘Things Can Only Get Better’ a fact that history would prove to be incorrect as his career would take a more adult mainstream direction on the One To One album which saw the hysteria go into a slow decline.

Having said all that Howard Jones continues to pull in the crowds on both the nostalgia circuit as well as reinventing his music on acoustic tours and by staging stunning events like his recent Union Chapel gig with the JBB trio. The package comes with a 16-page booklet including an interview with Howard Jones by music journalist Anil Prasad in which he revisits his memories of his sessions and live output for the BBC. These five discs document a pop icon at the top of his game and is a fabulous collection to add to any fans shelf especially for those who would “Like To Get To Know Him Well”.

The Oxford Road Show on BBC Radio 1 and BBC 2.
Broadcast Live from The Manchester Apollo Theatre on 15th March 1985
1 Things Can Only Get Better*
2 Automaton
3 Pearl In The Shell 4 Hide And Seek*
5 Like To Get To Know You Well*
6 Look Mama
7 Dream Into Action
8 Hunger For The Flesh
9 Hunt The Self
10 What Is Love?*
11 No One Is To Blame*
12 Always Asking Questions
13 New Song
14 Don’t Always Look At The Rain/Things Can Only Get Better* 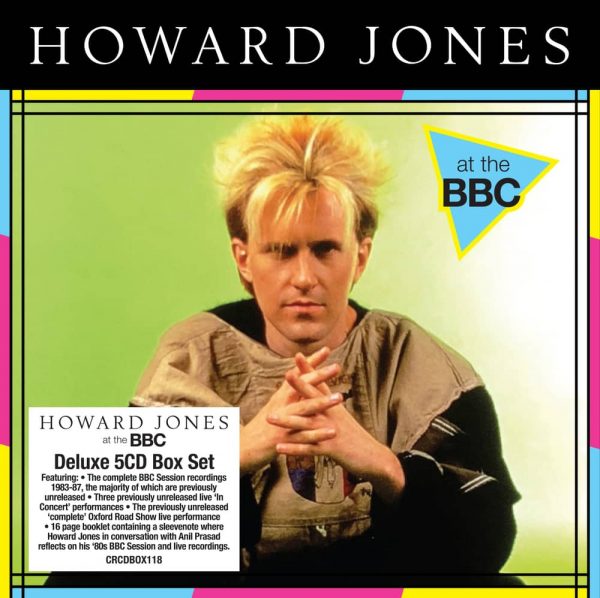