Hotel moved to MCA and recorded and released Half Moon Silver in 1980. An album that took big, bold strides in an AOR direction.

As the seventies turned into the eighties, AOR was on the rise in the US. It was fast becoming the lifeblood of FM Radio. For Hotel, like many, twenty years to write the first album, six months to write the second. Listening to this follow up, you would never have guessed. Today, so many artists labour over their recordings that it gets to the point where it’s so overworked no one can relate to it, all the inspiration is smoothed over and the magic is eviscerated.

Half Moon Silver is rich with memorably melodic twists and ear-catching hooks, woven into a network of tightly structured songs. ‘Refugee’ and ‘Now That She Loves You’ have everything. These two are convincing musically and lyrically. Both are full of drive and purpose, and just brimming over with that overwhelming sense of urgency and melody that is the hallmark of great AOR. ‘The Blind Side Of Love’ is in the same vein, with added grit and combative lyrics thrown into the musical mix.

‘Cold Blooded Red Hot Love’ and ‘Ned&Mary’ tease us once again with a Hall&Oates/Steely Dan vibe. Yet they are subtle enough to put this funky bit of syncopation across without making the tracks sound in any way out of place.

Elsewhere, the surprising emotional heft of this recording, most notably on other standouts . . . the smoky, soulfully sophisticated ballad, ‘Talk To Me’ and the C,S&N lyricism and harmonies of the title track . . . are a welcome change from the lazy sentimentality that began to pervade the genre. The lyrics seem to explore real emotions, giving the music a grown up resonance.

The usual sympathetic remastering job correctly focuses on sonic separation rather than volume, and seems especially effective on these two Hotel remasters.

This band should’ve had a blazing hot career. What happened? 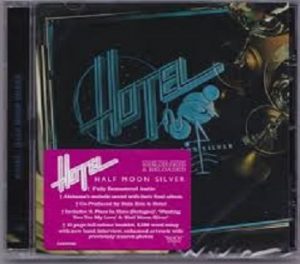