No weekend warriors, Horna probably sleep in their corpsepaint…

Horna are a black metal outfit who have navigated the line between bleakness and beauty for more than 20 years. It’s an attractive combination and as such, their latest offering Hengen Tulet is definitely worth spending some time with. This is the second album the Finns have released via World Terror Committee who have several dark gems in their locker at present, among them the recently reviewed Shrine of Insanabalis (here). Horna’s previous release Askel lähempänä Saatanaa resonated with many (MR’s review is here), and this follow up looks set to repeat the medicine.

Horna have been underground mavericks for more than 20 years during which time the line-up has spun more regularly than a roulette wheel. The one constant has been the band’s figurehead Shatraug, who has also cropped up on the Behexen radar. Askel lähempänä Saatanaa was their first work with Spellgoth at the mic following the departure of longtime frontman Corvus. Spellgoth’s black metal credentials are littered with such names as Darkwoods, My Betrothed, Black Death Ritual, and Prevalent Resistance and as such, his arrival helped breath new fire into Horna’s pumping heart.

A rough translation of Horna is ‘hell’ and the inspiration of Bathory is never far from the surface during the band’s ninth full length release. Horna are something of a black metal institution in their homeland although they’ve probably never received the wider acclaim their creativity merits. Some comments aired by Shatraug suggest that on this album the closeness to the darklands of Beelzebub are within touching distance and the furious flames that warm the chambers of hell can almost be heard licking the air through your speakers.

Horna’s songwriting grips you by the throat and then shakes you until your ears start to exude blackened wax. It’s exhaustive and demanding. Questions are raised to which there’s no visible answer. And yet collectively this Finnish clan create a supreme opus, rich in quality and honesty. The blastbeats are given added impact through the exuberant use of cymbals, offering greater depth to Horna’s percussion. The riffs are relentless, mainly furiously paced such but certainly never flat. With a bass that shudders away defiantly and of course the animated vocal outpourings of the sublime Spellgoth the apocalyptic landscape is painted with the agitated artistry of a Grade A student.

Tracks such as the roll-off-your-tongue ‘Tämä Maailma Odottaa’ are almost the very essence of what black metal is about. These are no weekend warriors. Horna probably sleep in their corpsepaint such is their commitment to all that black metal represents. The cloven hoofed giant would stroke his beard in approval if listening to Hengen Tulet. In fact, if this really is what hell is like then open the gates now. 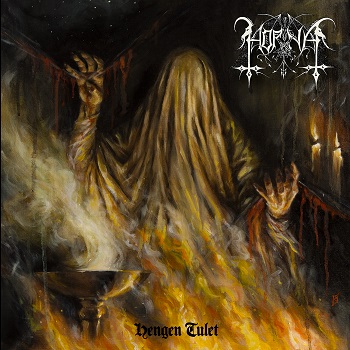