Spain is perhaps not your first thought when thinking quality thrash metal but that all seems set to change with Holycide who unleash their ferocious sophomore album Fist to Face. Dropping like a bomb on St. Valentine’s Day it’s certainly no love letter and by putting a modern spin on the genre should ensure that this quintet are on the tips of the tongues of thrashers everywhere.

If the presidential prevarications that form the 90 second intro of ‘Intrump’ doesn’t get your blood boiling then the opening salvo ‘Fist to Face’ certainly will. Totally worthy of being the title track, it’s akin to an artillery shelling as the guitars fire in tandem and the vocals soar then fall like a nuclear warhead. The logical succession to Pantera’s Vulgar Display of Power the guitar solos are short and succinct which only add to the urgency and their brevity ensures a punchy sound that means the song lives up to its name. Like the Duracell bunny on amphetamine the drums are a blur of double kicks and, as if mustering a hyperactive army, beat at a neck snapping pace. With descending chromatic scales ‘Empty Cyber Life’ is an all-out attack with a brief mid song interlude in which the band regroup before launching another sonic assault.

Still led by indefatigable vocalist Dave Rotten, it’s his unique style which lifts Holycide above the plethora of bands who are currently surfing the thrash wave. Existing somewhere between Death’s Chuck Schuldiner and Agnostic Front’s Roger Miret it’s a throaty, gargling growl that might take some purists a while to get used to in a scene where vocals are usually enunciated clearly. Case in point is the groove infused ‘Vultures’ where Dave’s voice provides a fine foil for the menacing gang shouts and the combination give the album an overall street level feel. The aptly titled ‘Nuclear Fallout’ follows and is a skin shredding affair complete with blistering guitar solo and Jorge Utrera hitting the skins particularly hard.

The excellently titled ‘Trapped by the Crappy Trap’ adds a touch of lyrical brevity amidst songs about nuclear winter yet the words are anchored in reality. The chug induced ‘Mentality Packs’ evidences a nice change of pace before we reach all out thrasher ‘The Aftermath (Recipients of Death)’. Seemingly without brakes Holycide race along at such a frantic pace that the stroboscopic effect is achieved. Like a wheel spinning so fast it appears to be turning backwards, each band member attacking their instrument with abandon as they race towards the finish line. There’s no mercy shown as ‘Napalm Sweet Napalm’ explodes like Thor throwing agent orange, an effect enhanced by bassist Dani Fernández who goes off on some excellent, rumbling tangents.

Thrash metal, with its roots in hardcore punk, was (initially) just as edgy and dangerous, but it soon became just plain goofy with cliched songs about beer bongs and organised religion. Holycide are definitely putting the fear back into thrash as ‘Innocent Hate’ attests. A track that could rival ‘Battery’ or ‘Angel of Death’ for intensity it steam-rolls forth crushing all in its path. The production on Fist to Face is a real boon with each instrument given room to breathe but it’s not squeaky clean like an Anthrax album, there’s a pleasant rough edge and a little dirt under the fingernails. Using the full dynamic range album closer ‘Fake Libertarian’ finds the guitars attacking from all angles and the lyrics spat with suitable spite.

From the classic Ed Repka style sleeve to the musical barrage contained within to the confrontational lyricism, everything about Fist to Face screams classic thrash. And if you’re not already a convert this album will have you donning high topped sneakers, cut off denims and blasting cassettes from a Ford pick-up! 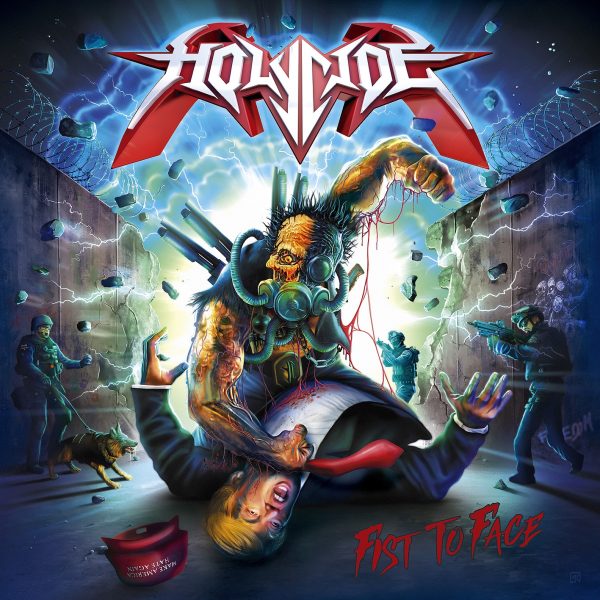