While Iron Maiden and Saxon will always be the flag-bearers for the NWOBHM, it is often the lesser known (but no less intriguing) bands who can define a movement and that’s certainly the case with Edinburgh’s Holocaust. Their debut EP and album (released in ‘80 and ‘81 respectively) demarcated a generation of disenfranchised, denim-clad youth and with an influence that far outstripped record sales, inspired Metallica and the embryonic thrash scene. Heavy Metal Mania: The Complete Recordings Vol. 1 collects the band’s output from 1980 to the Orwellian year of 1984 to shine a light on one of Britain’s most underrated bands.

It’s hard to understand with the benefit of hindsight, but The Nightcomers was roundly pilloried by the contemporary music press when it hit the streets in 1981. A cursory listen to aptly-titled opener ‘Smokin’ Valves’ will tell you that those critics were fools and while those scribes have been largely forgotten, this album still sounds fresh and exciting over four decades later. Melding the best of Sabbath and Motörhead and delivering it with the energy of punk was always going to be a winner and each of the nine tracks contained herein smoke like roadkill. Holocaust never aimed for highbrow, but in terms of visceral metal they couldn’t be beat and songs such as ‘Mavrock’ and ‘Heavy Metal Mania’ were life-affirming celebrations of the genre (and maybe that’s what offended all those po-faced critics?).

Much was made of Metallica’s cover of ‘The Small Hours’ on their Garage Days Re-Revisited EP but The Nightcomers shows that their influence goes far deeper. In fact, this album has Metallica’s fingerprints all over it and you can hear the seeds of ‘Seek & Destroy’ on ‘Death Or Glory’ and the classical motifs and riff-centric nature found on The Nightcomers was simply amped up a few notches on Kill ‘Em All. However, it’d be unfair to simply label Holocaust as proto-thrash because there’s so much more going on here. From the doomy nature of ‘Mavrock’ to the progressive title track which brings the album to an epic conclusion, this is a multifaceted album with no two tracks inhabiting the same sonic space and that renders it not only a cornerstone of the NWOBHM, but one of 1981’s best albums.

In a move that showed great foresight Holocaust videotaped their 1981 show at The Edinburgh Nite Club and released it at as a mail order VHS tape. Retailing at a cool £29.95 (well over a fortnight’s dole money) I’m not sure if this release hit its target audience, but as a historical document it’s priceless (and its low-budget vibe was aped by Metallica on Cliff ‘Em All). Videos currently circulating online evidence a hot, sweaty September evening and that seeps through every note of Live (Hot Curry & Wine). Holocaust sound far heavier in the live environment and with a rabid crowd egging them on, the band soon hit top gear and rarely look back over the course of 80 furious minutes. Guitarists John Mortimer and Ed Dudley trade blistering solos throughout (so be sure to check out ‘Jirmakenyerut’) and prove themselves a pairing who could rival Maiden’s Murray/Smith. A debut performance of ‘The Small Hours’ is strangely haunting while another new track, ‘Forcedown Breakdown’, leaves the audience dumbstruck, while full-on versions of fan favourites ‘Heavy Metal Mania’ and ‘Smokin’ Valves’ preserves the classic Holocaust as they should be.

Fractions over musical direction caused several splits in the Holocaust camp, and by 1983 Ed Dudley remained the sole original member. A softer sound resulted in a name change to Hologram, yet the band were tapping into past glories with their similar name and familiar logo (and in case there was any doubt press adverts carried the tag line “Holocaust are now Hologram”). In truth Steal The Stars shares little of The Nightcomers brute force (and certainly none of the spit-and-sawdust found on Hot Curry & Wine) and it does sound brittle when listened to straight after the previous two discs. This album offered an Americanised, commercial sound that was in perfect sync with the times and its thin, reedy production seemed tailor made for FM radio. There’s some interesting time changes and rhythms on here, but the new wave flirtations of ‘Expected To’ and the funky ‘Together Again’ are a little hard to swallow. We can’t forget what we know and when compared to the rest of this set, Steal The Stars is a rather lame effort.

Primarily culled from the Edinburgh Nite Club shows which produced the Video Soundtrack and the 1981 Live From The Raw Loud ‘N’ Live Tour EP, Live (Hot Curry & Wine) was a brief summation of all that made Holocaust great. Vocalist Gary Lettice in particular is in fine form and leads the charge through a half hour disc which finds strength in its brevity. While those Nite Club shows form the backbone of this set, it was actually pieced together from several performances and while much will be recognisable from CD2, there are some noticeable differences. The closing couplet of ‘Heavy Metal Mania/The Nightcomers’ makes for a hefty combination and when combined into a 10 minute monolith make for an arresting experience. The 1983 remix gives the band a far stronger sound to that which was found on the VHS tape and made this a release that could capture (or even top?) the chutzpah found on The Nightcomers.

Live (Hot Curry & Wine) should really have been the end of Holocaust, but just like Dracula, they’re an entity who won’t stay buried. When their record company demanded more product, up stepped guitarist John Mortimer to deliver No Man’s Land. Recorded on a tight budget (and an even tighter time schedule) this album had the potential to be a train wreck (not unlike Steal The Stars) but No Man’s Land turned weaknesses into strengths. Sometimes heavy metal can be overproduced, often it is better to have a little dirt under the fingernails, and the raw urgency of this release captures a time five years past when punk energy was fused to metal to create the nascent NWOBHM. Subsequently, the 11 tracks comprising No Man’s Land are sonic blasts much in the vein of Tank, Motörhead and Girlschool. John Mortimer played all the instruments on this release (aside from drum duties, handled by Steve Cowen) and its singular vision makes it a fine addition to the Holocaust canon and really should have been issued in place of Steal The Stars.

Maybe it was part of the DIY ethos, but it seems that the 7” and 12” single/EP was the perfect vehicle for NWOBHM bands. Sure, the scene produced some fine albums but there’s no denying the sheer power of releases such as The Soundhouse Tapes and, of course, the four Holocaust releases that comprise Heavy Metal Mania. The use of an air-raid siren has been used to introduce countless bands but it was never more appropriate than when heralding the arrival of 1980’s Heavy Metal Mania 12” and it was a release which succinctly captured the excitement of the era. Later that year, Smokin’ Valves sent the band on an upward trajectory and its title track doesn’t bear over-analysis, it’s just a great, great, great song. The four cuts from the Live From The Raw Loud ‘N’ Live Tour EP later found their way onto the Hot Curry & Wine releases. Three tracks from 1982’s Coming Through close this collection and illustrate what a loss it was when the original band folded because these tracks show a developmental arc which signposted a bright future.

After a hiatus, John Mortimer resurrected Holocaust once again and secured the band’s legacy with a series of well-received albums. However, if you want to listen to a band who really captured the spirit of the NWOBHM, then look no further than Heavy Metal Mania. 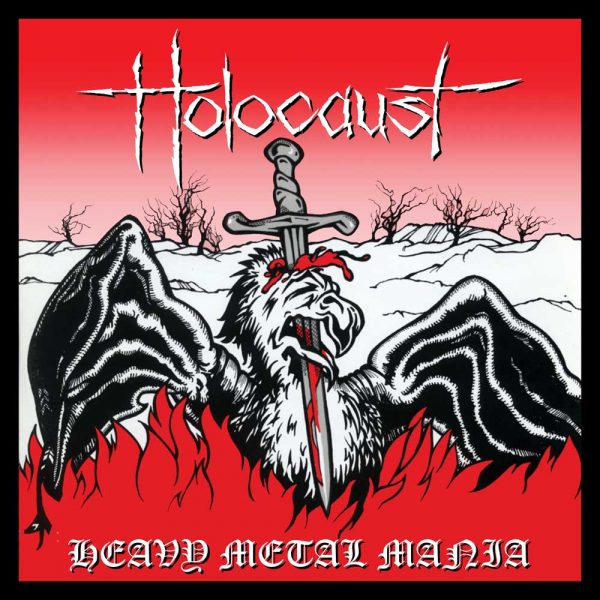