Ooh, a Stones cover, and a good one at that. Well, if you enjoyed that then pour yourself a snifter and settle back reader because this here is an albums worth of them, and bloomin’ great it is too.

Hollis Brown, for those not familiar, are a damn fine Americana, roots rock band. Having started life as a garage band they are returning to their roots for ‘In The Aftermath’ – an album recorded in one whiskey-fuelled, 24 hour session which sees them tear through ‘Aftermath’, The Rolling Stones classic 1966 album, in it’s entirety. Nothing more, nothing less.

It’s a great idea, and one fraught with danger. ‘Aftermath’ is a fine album, the first Stones album of all original material, and much loved by many, it would be very easy to fuck this up, to get the tone, the feel, the vibe wrong. It’s The Stones man, a hard act to follow.

But Hollis Brown nail this. Totally. It’s played with love, with respect…but not too much respect, the band’s own personality remains intact throughout. Let’s face it, The Stones were never perfectionists, sloppy is in their DNA and Hollis Brown completely get this. The album is loose, rocking, and gets increasingly so as it progresses into the 24 hours.

The album plays in chronological order so we kick off with ‘Paint It Black’. The exotic, world music feel is replaced by a more psychedelic guitar sound before we launch into a nicely scruffy, garage take on the classic track. The drums are wild, there are keys somewhere low in the mix and it all works really well, whetting your appetite for the rest of the album.

‘Stupid Girl’ is snotty, scratchy, it definitely ups the punk ante, while catching the feel of the Stones perfectly. Mike Montali captures the essence of Jagger without ever aping him. It gives the song the raw feel that Stones circa ’66 could only imply. As Montali himself explained: “We weren’t focussed on cleanliness, we were after a feeling”.

‘Under My Thumb’ returns to garageland, it’s less poppy than the original, possessing a sharper, dirtier, nastier edge while ‘Doncha Bother Me’ punks things up again – the drums are very Charlie-esque while a nice distorted electric harmonica adds a dash of the blues. there’s a touch of slide guitar, its all gleefully sleazy. This album is getting very good indeed.

‘Think’ is brilliant, the guitars becoming increasingly, erm, Stonesy. It’s 1966 music played in a 1975 style. By the time ‘Flight 505’ launches from the runway the band are firmly in the pocket. ‘High And Dry’ is an acoustic hoedown, drenched in barroom piano and a stomping drumbeat. We end with the seven plus minutes of ‘Goin’ Home’. It has a woozy, end of the night/party vibe, progressively getting looser, you can almost taste the booze, feel the enjoyment. It begins to stretch out raggedly, a gear change kicks in and it heads off into a killer jam, the guitars suddenly beef up, becoming more threatening as it all almost spirals out of control as it charges towards it’s joyously sloppy finale.

This. THIS is how to cover an album. Hollis Brown absolutely nail this and leave you wanting more, hoping that they are somewhere now, rooting through their vinyl collection for the next gem to cover. This is, and was, a glorious, spontaneous slab of rock ‘n roll. Enjoy, cos that’s what it’s here for. 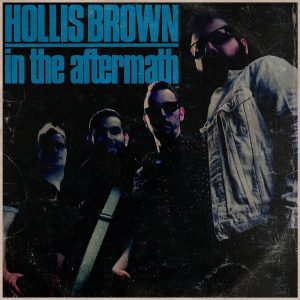