1979 – Southern Rock, a snapshot of music in evolution…

Resurrected by Rock Candy Records and ministered to by Brian McGowan

Ex Outlaws’ guitarist/vocalist Henry Paul‘s first album with his own band. 1979, and the album itself is a musical microcosm, a pin sharp, hi-def snapshot of rock music’s transition from the sixties/seventies to the eighties. It was music in evolution, carrying the sweet, westcoast sound of the Eagles, the Byrds, Poco and others into the deep south, where the blue collar blues rock of Lynyrd Skynyrd, 38 Special and other confederate sons were flying an easily identified flag.

Probably because of that, and bearing in mind this is the first album by a new band, the songs tread some well-worn melodic routes, and there’s no attempt (or intention) to sustain a mood, or pursue a particular narrative. They just went where the music and their influences took them.

They were country, and folk, and rock’n’roll (‘Foolin’, ‘You Really Know What I Mean’). They did banjo strummin’, foot-on-the-floor boogie (‘Lonely Dreamer’, ‘One Night Stands’), and some of their songs echoed down Laurel Canyon, where the likes of Furay, Souther and Crosby harmonised till dawn (‘So Long’, ‘All I Need’, ‘Crossfire’), arguably predating Americana by a decade.

That said, all these tracks are subordinate to the album’s key track, ‘Grey Ghost’, a powerful, seven minute ode to the late Ronnie (Lynyrd Skynyrd) VanZant… “the man is gone but the spirit remains”. It is a beautifully wrought tribute that never descends into sentimentality, and appropriately, Paul’s passion is punctuated by bursts of rootsy guitar soloing that ramp up into a blazing twin guitar assault, illuminating the track like a firework display.

In common with many reissues on this label, ‘Grey Ghost’, the album, enjoys a sympathetic remastering job, adding sonic clarity and musical thrust. Paul went on to record three more albums, one with the help of Richard (Mr Mister) Page and Bill (Chicago) Champlin before the band broke up. He kept the good company habit, forming the band Blackhawk with Van Stephenson. More recently he reformed The Outlaws with erstwhile colleague, Huey Thomasson. 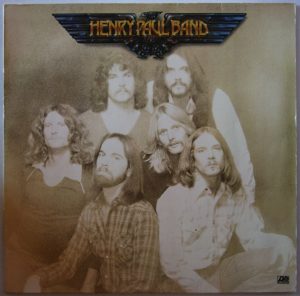