Verging on a great album…

It’s interesting to see in recent years some of power metal’s bigger act’s pushing their sound forward. The new Blind Guardian album was more experimental and dynamic than expected, as was Sonata Arctica’s Pariah’s Child last year. However, we have Helloween here who have come round full circle from their experimental period in recent years, delivering another safe album that should please all sides of the fanbase happy. Which is a good thing for them, as they have one of metal’s more infamously split fanbases. Anyone with a passing interest in heavy/power metal who spends a decent time on the internet, will probably have took part in a “Deris vs Kiske” thread at least once.

My God-Given Right, the band’s fifteenth studio release gives us another hour of heavy metal with some slight tinges of power metal, that you have heard a thousand times before. Fans of the band or this style will already know how this sounds, but there are definitely some anthems on here that will provide us with fun and enjoyment through the summer months. The single ‘Battle’s Won’ being one of these choice cuts, containing plenty of up tempo crunchy speed metal riffs and a undeniable chorus, which harkens back to the band’s glorious formative years. Unfortunately the album does dip in enjoyment and energy levels towards the mid period and, much like their peers Edguy, the band delve into silly cock rock territory far too deeply (see ‘If God Loves Rock ‘n Roll’ and ‘Russian Roulé).

The album’s runtime is pushing too long at just over an hour, which makes listening from start to finish dull. However, I can see the album providing the most enjoyment for listeners when dipping in and out of the record and sticking to your choice picks, or making these a part of a relevant playlist as opposed to one piece of work from start to finish.

This effort will keep Helloween fans relatively happy; it’s definitely not lacking memorability by any means and it’s nice to see the band embracing some speedy numbers and double kick lead power anthems. The closer was a nice surprise to being much darker in places and epicer on the whole compared to the rest of the tracks on the album. ‘You, Still of War’ showcases a progressive song structure and some of Helloween’s more experimental touches with some fantastic lead work and use of keys. If the album had some of the filler trimmed and another song like this on here, it would be verging on a great album. Even though I feel the band have become another casualty of major label mass marketing, I couldn’t ever be mad at Helloween, even when they put this album out again in a few years’ time with a different name and artwork. Enjoyable if formulated, predictable and the filler on offer. 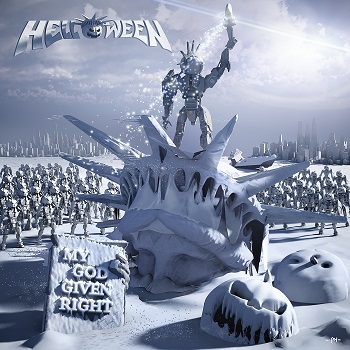