Whenever the term ‘old school black metal’ surfaces in not very polite conversation, the name of Hellhammer is invariably one that you will hear thrown into the charred melting pot. If ever a band is worthy of that old school tag then surely its these guys who fully deserve to be spoken of in near reverential tones.

If the name of Hellhammer is one that you recognise more than their actual music then a chance to get acquainted through their remastered classic EP is recommended. First released in 1984 on the new German record label Noise, there are just six songs on Apocalyptic Raids but what twisted atmospheric treasures they are. The youthful Swiss trio consisted of Denial Fiend on drums (or on coffins as they memorably stated on the sleeve notes) Slayed Necros on bass and Satanic Slaughter on the painful and at times scary vocals.

For the uninitiated, the frontman also answered to the name of Tom G Warrior, now of Triptykon and of Celtic Frost fame sandwiched in between. The Swiss triumvirate were certainly pioneers of that red-raw black metal speed punk, inspired largely by black metal forerunners Venom and hardcore UK punk outfit Discharge, while their DIY ethos, leathers and studs bolstered by a few strokes of liberally applied corpsepaint all added to their underground mystique.

The fires that rage within this primal release are set alight by the barbarous grunt orgy opener ‘The Third of the Storms,’ hastily followed by the even speedier ‘Massacra’ – a song subsequently covered by Emperor, among others. But it is really on the immense 10-minute epic ‘Triumph of Death’ – the sole track to be carried forward from the band’s Satanic Rites (1983) demo – that the full embryonic brilliance of Hellhammer shines through. Once Warrior’s psychotic warblings, agonised cries and sinewed strains peter out, a dark rumbling riff emerges that still carries the same kind of jaw-dropping power when listening today as it did first time around.

Warrior has endorsed this highly collectable re-issue, penning some authoritative notes, reminding us of the band’s insolence in the studio resulting in what can best be described as a low budget finish. It failed to impress many of the reviewers at a time when Metallica were making inroads in the US. Hellhammer’s grassroots gravelly output won them few friends in the day, but 35 years on anyone with black metal juices pumping through their veins, cannot failed to be both charmed and chastened by such primal symphonies as ‘Horus/Aggressor’ and the rapid-fire ‘Revelations of Doom’.

The band survived as an entity for scarcely two years before Warrior decided to draw a line under Hellhammer (who never performed live) and start over with new project Celtic Frost.  Hellhammer’s albeit brief legacy remains a significant stepping stone in the evolution of black metal, the band infamously labelled by one knowing scribe as “the unholy bastard child of Black Sabbath, Motorhead and Venom”.

There is a substantive booklet within the CD that helps paint some form of historical headbanging picture. Along with Warrior’s personal reflections of that era, it also features some incredible photos from that era.

Vinyl collectors are spoilt further still, with a 12” deluxe gatefold treasure trove, complete with 24-page booklet and two posters. For the record, the EP has been remastered by Triptykon guitarist Victor Santura, thereby neatly pulling together Tom G Warrior’s career then and now.

Apocalyptic Raids is out now via Noise Records/BMG 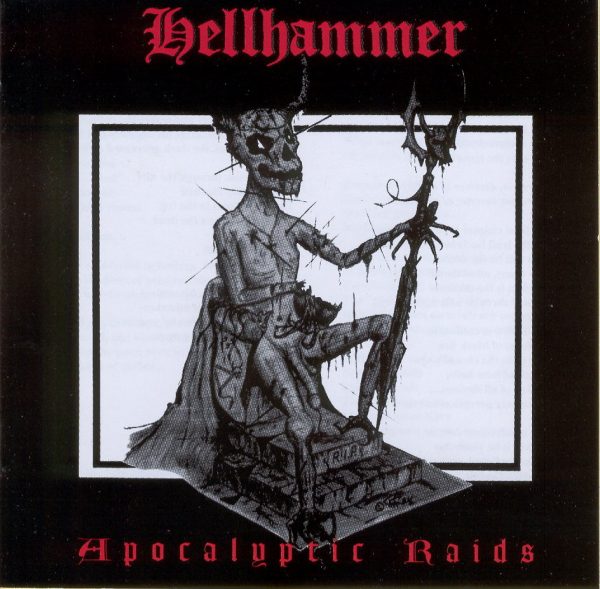