With its roots in hardcore punk, part of thrash metal’s early appeal was its raw, aggressive, rudimentary sound and it’s a vibe Hell Freezes Over have perfectly captured on their debut album Hellraiser. Recorded with an analogue console and only using instruments manufactured in the ‘80’s there’s something reassuring retro about this release that will appeal to old school thrashers the world over.

Fomented in Tokyo in 2013 Hell Freezes Over wasted little time and released the Hells Garage demo the following year with the aptly titled Speed Metal Assault EP hitting the streets in ‘18. Both were solid releases but Hellraiser is a major step up in class and finds the band upping the ante and that’s immediately obvious on the self titled opener. Like Exciter jamming with Exodus ‘Hellraiser’ fairly races out of the blocks with it’s foot firmly on the pedal. With a riff to die for it’s an unstoppable force that’s sweeps up the unwary in its slipstream and, like a wheel spinning at an impossible speed, appears to be flying backwards.

‘Roadkill’ follows with vocalist Treble Aidysho, sounding like a cross between Chuck Billy and Minoru Niihara, hitting all the right notes while guitarists Ryoto and Hirotomo dizzy the listener within an intricate maze of riffs. ‘End The Breath Of The Night’ encapsulates that moment in time when punk and the NWOBHM were morphing into thrash. In fact it sounds so authentic you’d be forgiven for thinking you’ve time travelled to The Fillmore, San Francisco circa 1984 for a show headlined by Forbidden Evil. However, despite their love of thrash, Hell Freezes Over are no mere copyists and there’s ‘70s and ‘80s rock influences that add an original edge with ‘Grant You Metal’ recalling the excitement of  Metal On Metal era Anvil.

But thrash is what Hell Freezes Over were built for with ‘Burn Your Life’ and ‘The Last Frontier’ both being edge-of-your-seat rides. ‘Phantom Helicopter Attack’ sounds exactly like the title suggests and arrives with the force of a stealth bomber to carpet bomb the space between your speakers. Imagine Laaz Rockit and Death Angel in a tug-o’-war and you’d have something approaching ‘Hawkeye’ with bassist Takuya and drummer Tom Reaper daring you to keep up. The penultimate ‘Overwhelm’ thrashes along at an insane number of beats per minute before we arrive at epic closer ‘Eternal March of Valor’. It’s an instrumental that allows the band to spread their musical wings to incorporate pure speed metal alongside neo-classical flourishes that are more in tune with Maiden and Manowar.

Hellraiser is a fine debut album from these Tokyo thrashers and it’s one that should propel them into metals next tier and onto global recognition. 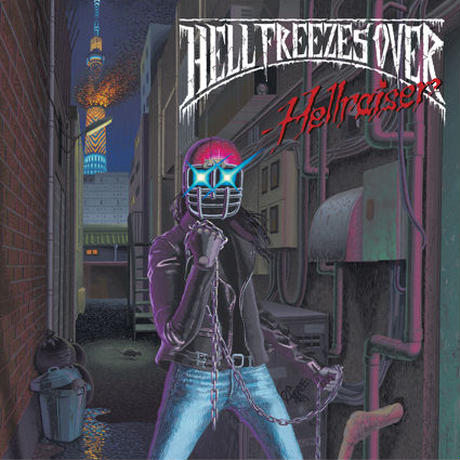