Drawing inspiration from the latter half of Talk Talk’s career Held By Trees are a musical collective whose main focus is on spontaneity. There’s almost a free form jazz sensibility to their modus operandi which renders their debut album, Solace, an intriguing proposition. Featuring a cast of rock royalty this is a record that’s rooted in fertile soil and the eight tracks which comprise Solace veritably bloom and blossom.

It’s hard not to over emphasise the influence that the Talk Talk albums Spirit Of Eden and Laughing Stock had on modern music. Both were creative masterpieces that weren’t successful in their own time, yet they’re now regarded as progenitors of the whole post-rock movement. It’s that aesthetic into which Solace taps and things get off to a rather understated start with ‘Next To Silence’. With Hammond keys hanging starkly against a backdrop of field recordings this cut captures the very essence of nature as the notes reflect light, as if dew drops caught in the morning sun. It’s all very hypnotic as layers of sound are added, almost imperceptibly, to slowly subsume you in sound and makes this a 360-degree listening experience.

There’s a certain magic created when music is played for the very first time and if it’s not caught on tape then it’s unlikely to be harnessed to that degree ever again. The impromptu sounds that float from this disc have an onerous charm, a once-in-a-lifetime sensibility that’s both charming and easy on the ear. A luxuriant river of silk, Solace contains eight tracks that flow together seamlessly which, considering the number of musicians who appear on this album, is no mean feat. The quality of musicians on display here is absolutely stunning, and there’s too many notable names to list but Dire Straits founder David Knopfler shines particularly brightly on ‘Rain After Sun’ with his guitar sparkling like stars in a crystalline sky.

Not only does this album employ a variety of musicians but it engages a range of instrumentation too and this gives each track its own unique feel. The double bass on ‘The Tree Of Life’ provides real depth while the violin on ‘Mysterium’ adds an ethereal, nocturnal vibe. Of course, all this could leave Solace sounding a tad eclectic, yet the album is stitched together by David Joseph. He’s provided a basic framework for each track and allows the assembled cast plenty of room to get expressive. Held By Trees create vivid soundscapes (as Talk Talk did) and they paint their sound with a rustic palate that’s rich in autumnal colours; burnt reds, conker browns and waxy yellows are all mixed to create music that’s a kind of medicine for the mind.

My only real complaint with Solace is that at 38 minutes it’s just too darn short. You get the feeling that these songs could be extended considerably, and without losing their chutzpah. Perhaps when these songs are played live, they’ll be extended into megalithic monoliths and hopefully, that prospect won’t be too far off. 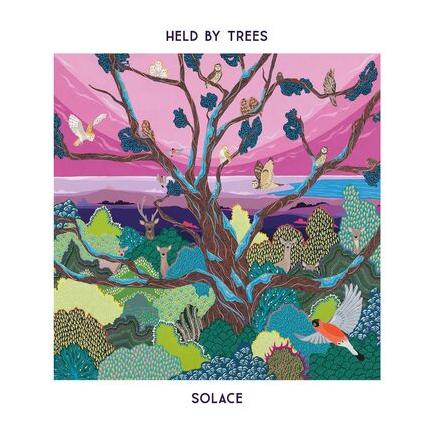