Formed in London in 1972 and named after a gang of street urchins from the William S. Boroughs novel “Nova Express”, the Heavy Metal Kids were neither heavy metal or kids, but were classic hard rock in the Nazareth mould. By 1974 the band were signed to Atlantic Records alongside Led Zeppelin, King Crimson and Aretha Franklin where they recorded their first two albums before moving on to Micky Most’s RAK label for Kitsch, the final album to feature vocalist Gary Holton. Those first three releases are now brought together in this latest Cherry Red Records set, the aptly titled The Albums 1974-76.

The first self-titled release was produced by Dave Dee (of Dave Dee, Dozy, Beaky, Mick & Tich fame) but from the heavy opening guitar riff of ‘Hangin’ On’ it is obvious that this is no mere pop by numbers, especially once Holton’s gravel-toned voice kicks in like a McCafferty/Rose hybrid. Whether it’s on the bluesy rock of ‘Ain’t It Hard’, ‘Nature Of The Game’ and ‘Always Plenty Of Women’ or the more soulful ‘It’s A Shame’ and the piano led ‘Kind Woman’ the band were always at odds with a singles chart dominated by the ‘Seasons In The Sun’, ‘Billy Don’t Be A Hero’ and ‘Tiger Feet’ pop or an album chart listing prog big guns The Lamb Lies Down On Broadway and Rick Wakeman’s Journey To The Centre Of The Earth alongside the glam rock of Slade and Sweet. They certainly weren’t frightened of experimenting, even attempting their own take on reggae on ‘Run Around Eyes’ many years before it was seen as a mainstream musical form. Sure, ‘We Gotta Go’ sees the HMK putting on there best Ian Hunter cockney accent to pull in those Mott fans but they only really hit their stride in time for closer ‘Rock ‘N’ Roll Man’, but with only the ‘We Gotta Go (Reprise)’ following it is far to late. On this release of the album, four bonus track are added and the question raised is “why ‘Bottle Of Red Wine’ wasn’t on the original track list?” as it fits the Slade/Mott blueprint of the era to a ‘T’. I can only presume that it wasn’t written until after the original session. ‘Run Run Run’ and ‘No Time To Talk To You’ bring little new to the party before disc one closes with an edited 7” version of ‘Rock ‘N’ Roll Man’.

With Dave Dee moving on, Andy Johns (brother of Glyn) took up the production seat for their sophomore album Anvil Chorus. Dropping the “Heavy Metal” from the “Heavy Metal Kids” for this release, straight away ‘Hard At The Top’ signals that this is an altogether harder rocking affair with its “Doop, Doop” backing vocals out Motting Mott. ‘You Got Me Rollin’ continues this harder edge with (the returning) Cosmo’s guitar riffs in command over the “Rollin’” Ronnie Thomas bass line. Holton’s OTT cockney drawl is kept firmly under control with only a hint showing through on tracks including the Stonesy ‘On The Street’, the pleading ‘Situations Outta Control’ and ‘Crisis’. Elsewhere alongside the big gun guitar riffs plenty of (pumping) piano is in evidence for ‘Blue Eyed Boy’, ‘Old Time Boogie’ and (not so pumping) ‘The Big Fire’. Highlights come in the form of the Blackmore influenced instrumental ‘The Turk (An’ Wot ’E Smokes)’ and ‘The Cops Are Coming’ with its revving motorbike intro and Holton spitting out the dialogue. Punk before it was a fully formed thing. Just two bonus tracks this time, non album single, the excellent cover of The Show Stoppers 1967 hit ‘Ain’t Nothing But A House Party’ and album out-take ‘Stand Back’.

Moving from Atlantic to Mickie Most’s RAK label, album number three was earmarked as Most’s big production swansong and the band photos tell the story replacing the street urchin image from the first album with the preened and posed band to match the highly polished sound on offer. Recorded in 1976 but not released until 1977 due to the lengthy production time Kitsch finds Cosmo back out and keyboard player Danny Peyronel replaced by future Uriah Heep man John Sinclair adding to the slicker sound. Sinclair’s bombastic keys are evident from the outset with ‘Overture’ heralding an anticipated new era for the Heavy Metal Kids (back to the original moniker) but normality soon returns with ‘Chelsea Kids’ pounding piano showing the bleaker side of the London neighbourhood. Holton is in great voice as ‘From Heaven To Hell And Back Again’ and the impassioned ‘Cry For Me’ lead on to album highlight and single ‘She’s No Angel’ which found The Kids on Top Of The Pops before the Blockhead-esque ‘Jackie The Lad’, ‘Docking In’ and ‘Squalliday Inn’ with it’s tip of the hat to ‘Roll Away The Stone’ complete Kitsch‘s darker themed tracklist. Bonuses are made up of the punky non album single ‘Delirious’ along with its b-side ‘Hey Little Girl’, the unreleased Quo inspired ‘Boogie Woogie’/’You Got What I Want’ single and ‘New Wave’ the final track recorded with Holton on vocals a track which in the hands of an ‘Action’ era Sweet would have probably charted.

Like their contemporaries Geordie, the Heavy Metal Kids never quite got the breaks and in 1976 AC/DC hit the world with ‘High Voltage’ and the game was up. Years later Holton, along with Brian Johnson from Geordie, both went on to audition for AC/DC following the death of their frontman Bon Scott and we all know what happened next. After Kitsch the band went in to hiatus and when now actor (Breaking Glass, Minder, Auf Wiedersehen, Pet) Gary Holton passed away in 1985 it looked like that was it for the Heavy Metal Kids. However, in 2002 they recorded a new album (Hit The Right Button) with Danny Peyronel handling vocals. In the years since they have seen a number of line-up changes (including a short time with Eastenders “Naughty Nick” actor John Altman on vocals) but still continued to perform live in 2022. Holton’s voice was the key to the bands early punk-meets-rock sound and despite originally giving them little success this collection shows the Heavy Metal Kids at their absolute quirky best. 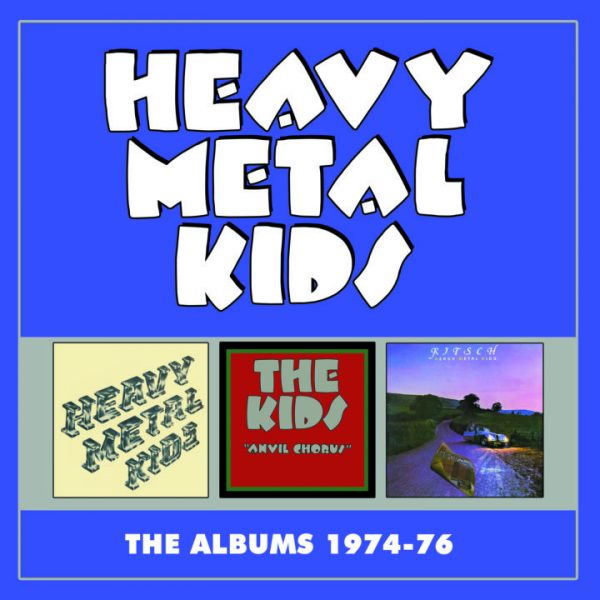