It’s been a while since Heather Findlay graced the Robin’s stage, nearly three and a half years. In that time, not much has been heard from her apart from guest appearances on other artists’ records, such as John Mitchell’s excellent Lonely Robot project, but with her first full album of new material since she bid farewell to Mostly Autumn way back in 2010 and a newly reorganised band, she made a very welcome return.

Findlay’s band members provided the supports for this show. Firstly backing vocalist and harpist Sarah Dean, on stage shortly after the doors opened and obliged to perform her set while people were still filing into the hall. Accompanying herself on harp, which was an unusual site in the Robin, she’s generally described as a folk singer, which seems fair enough. Her songs are very traditional sounding, although a song she recorded for a Bob Dylan tribute album, ‘The Man In The Long Black Coat’, had a whistling section which brought an interesting spaghetti western feel to the proceedings. She ended the set with ‘Traveller’s Moon’, sung a capella and superbly, which held the crowd’s attention and brought a fine end to a short but very enjoyable set.

Heather Findlay’s long standing musical collaborator Chris Johnson’s Halo Blind project provided the second support, playing their new album Occupying Forces. It has quite a confrontational subject, the duplicity and machinations of those who govern us, and in many ways the music matches the subject, often challenging the more conventional Prog fan with its ambition. It often steps outside the more usual sounds and structures you associate with the genre, and doesn’t have the same concentration on melody as the headliner. The nearest comparison is Radiohead, I suspect, but there’s often an ‘indie’ atmosphere to some of the songs, not to mention the contrariness of a band like The Treat. One issue that may put some off is that the lead voices, Chris Johnson and keyboardist/guitarist Andy Knights sound quite similar, in the same register as Neil Young, and listening to them, you do sometimes wish for a contrasting voice to add some variety. For a fan of more traditional ‘Prog Rock’, they may be quite a difficult listen, but equally it’s often a fascinating and rewarding one. 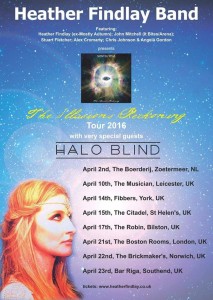 The current Heather Findlay Band is a seven piece, with the rhythm section of Alex Cromarty on drums and Stu Fletcher on bass having previously performed the same duty for Halo Blind. Chris Johnson takes care of guitar and keyboard and Sarah Dean provides backing vocal and occasional harp. Most of the keyboards and more vocals come from the rather wonderful Angela Gordon, Heather’s former colleague in Mostly Autumn, and on guitar is none other than John Mitchell, rather than Dave Kilminster, who played on the album. With the latter now in Steven Wilson’s band and playing tour dates in Eastern Europe, young Mitchell was a very welcome replacement.

The first part of the set was a play through of Ms Findlay’s most recent album The Illusion’s Reckoning, written and recorded with Sound of Contact’s Dave Kerzner, under the name Mantra Vega, and as said before is her first full length set since leaving Mostly Autumn. It’s a good album, without quite reaching the heights she’s shown herself capable of in the past. However, with this excellent band firing on all cylinders, the live version is a much meatier proposition. The band gives it an added edge and an extra spark and makes this an engrossing, exciting set. If ‘Islands’ eases you in comparatively gently, a song Fleetwood Mac might be quite pleased with, the full-on choruses of ‘Veil of Ghosts’ and ‘Lake Sunday’ take things to a different level. One of the best songs on the album, ‘Mountain Spring’, starts with a slightly Yes-like acoustic guitar part, before the band add layers and layers of sound, and another sumptuous chorus, then ‘In A Dream’, written in memory of a trip to India, brings Angela Gordon to the fore with a superb flute part that harks back to the glory days of Mostly Autumn.

After the gentle ballad ‘I’ve Seen Your Star’, Alex Cromarty’s drums take us into the title track of the album, with its stately opening and terrific melody, everything a melodic prog epic should be, with each member of the band playing and singing their personal socks off. Such a good performance, which made me listen to the album again in a whole new light.

That wasn’t the end of the show, as the band now gave us some careful selections from Heather’s back catalogue. Firstly a huge cheer as Chris Johnson on piano picked out the opening notes of Mostly Autumn’s ‘Carpe Diem’, a song that won the Classic Rock Society’s Best Song, with the band giving an emotional performance. Next is ‘Magpie’ from Heather and Angela’s Odin Dragonfly project, originally recorded as a duo with only acoustic guitar and flute, but given a completely new dimension when played by a full band. A song from Heather’s Phoenix Suite EP came next, again given something extra in this setting, then another Odin Dragonfly song, ‘Magnolia Half Moon’ and a superb ‘Caught In a Fold’, before another surprise and a real treat, as Heather joined John Mitchell for the melancholy ballad ‘Why Do We Stay’ from the Lonely Robot album, or ‘Lonely Rowboat’ as Mitchell called it. After all that, the finale was the song that became her theme tune during her time in Mostly Autumn, ‘Shrinking Violet’, with a pre-song dedication to a long-time fan about to celebrate his 50th birthday, it sounded as good as ever, with a tremendous guitar solo from Mitchell.

I’ve no great desire to overdo the Mostly Autumn references, but hearing the new album played live and the way the band gave new depth and dynamism to the older material, I have to say that this was the most enjoyable and consistently good show I’ve seen by either party since the split. Great choice of songs, brilliantly played. This band can come back and play for us any time.