A gig with a famous orchestra is de rigueur for any self respecting classic rock band. Gone are the days when such a notion would raise the spectre of Spinal Tap, and as orchestras and classic rock bands go, you don’t get them much more famous than The Royal Philharmonic and Heart.

Recorded at the Royal Albert Hall (where else?), the combination of classic and classical proves irresistible. The setlist is much as you would expect, and in honesty, such is the dramatic content inherent in any of the band’s songs, you could pick a suitable setlist out a hat.

It’s all about timing, of course, and that means it’s equally about the quality and imagination of the arrangements. Wisely, Jim Parsons was chosen to produce – his live production and arranging work with Metallica, The Stones and Van Morrison, among many – is legendary. As many bands have found to their cost, it’s an elementary mistake to big up every note, every moment. To attempt to match rock guitars and percussion to the cavernous sound of a symphonic orchestra in full flight is always going to be a losing – and very messy – battle. A tight rein is required. Thus Parsons.

So yes, it’s all about timing. Wonderfully conducted, the musicians here know just when to swoop in, or swoop out and leave these enduring hard rockers to have the stage (virtually) to themselves… ‘Dreamboat Annie’ sounds vividly symphonic; ‘Mashallah’ gains elegance from focused bursts of violins, and the sheer heft of full string and woodwind sections lifts ‘What About Love’ into a new golden age of orchestral rock. And even on those classic rock radio staples, ‘Alone’, ‘These Dreams’ and indeed, ‘Barracuda’ the rock band/orchestra fusion creates a dramatic anticipation that keeps you on the edge of your seat.

Ann Wilson is still in great voice, the band is tight and the audience frequently on their feet. It’s not often Heart play the UK. Performing with the Royal Philharmonic is an apt way to make amends.

The concert recording has been released both in CD and DVD form, with the latter featuring an interview with the Wilsons as bonus content. 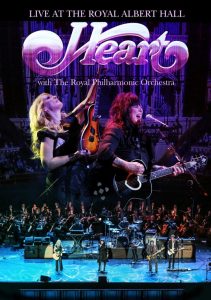