Interesting title. Did anyone else own a Colosseum?

The success of 2012’s Fanatic release emphatically confirmed the Wilson sisters’ enduring appeal on both sides of the Atlantic. They are one of those rare artists who seem to have stretched their prime years across the decades, holding on to a sizeable core fanbase while adding new ones with each new release. As a duo with the ability to constantly reinvent (but not too much), the key to Fanatic was again to bring in producer, Ben Mink, who helped the sisters bear witness to past memories and regrets, in the writing and recording process, done on the road, between gigs. The way it used to be done… a burst of inspiration, captured and committed to tape, picaresque, intense, caught in the moment.

The sheer freshness and power of Fanatic, never mind Mink’s studio inventiveness, was always going to be a challenge, performed live. It would have been good if it had genuinely been a live performance of the whole album, but you gotta play the hits, right? Well yes, of course you have, and they are all here.

But it’s the album’s title track that opens the set, louder, deeper, darker, inched along by bass heavy guitars, brightened by sunbursts of chiming riffs. Then, the seamless, effortless but totally convincing jump back in time to the hard rocking ‘Heartless’ (1976) and the yearning AOR of ‘What About Love’ (1985) suggest the duo can walk between worlds or at least see them clearly, even now.

In a way, those three opening tracks are an introduction to the real power of live music, realism, rawness and dependence on real talent, something that is conceivably lost among the synths, sequencers and Protools’ flatpack assembly of today’s studio recordings.

An enthusiastic home crowd audience digests the chartbusting biggies, ‘Alone’ and ‘These Dreams’, the folky ‘Dog&Butterfly’ and 1980’s feminist entreaty, ‘Even It Up’ voraciously, metaphorically licking their lips, with ill disguised glee. And despite the fact that the sisters close with the rollicking twin blasts of ‘Crazy On You’ and ‘Barracuda’, it’s the preceding Fanatic track, ‘Dear Old America’ that engages and hits hardest with a North American audience that can connect with the sentiments, and the conclusion.

As an object lesson in how to do a live album, look no further. 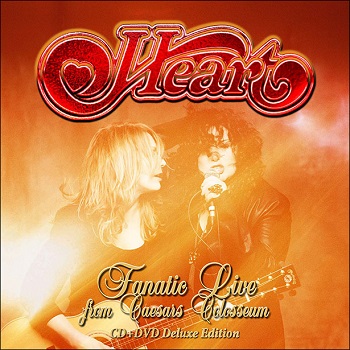