Headline Maniac are 3 long serving members of Eddie & The Hot Rods (see Wiki…most of the population of England appear to have been members at some time).

With a few exceptions, the HM sound has gained distance from the loud, fast, punky rock’n’roll of their parent band, and is now firmly in mainstream pop and rock territory. Kind of. And, putting aside the tongue in cheek “story” conceit told through the Chronicles set up, you can see that this a this is a neat little head turner of an album.

Each track is a chapter in this “Jekyll & Hyde’ character’s pursuit of, ahem . . . feminine company. And in each one our protagonist’s warped psyche unravels that bit further. And where the story – the concept – becomes the whole point in other genres, Progressive Rock for example, Leddfoot’s Chronicles focus on the songs . . . the album is full to the brim with naggingly familiar hooks and catchy tunes, big chords and, occasionally, stadium sized anthems.

We’ll get a couple of mis-steps out the way first. The 3 minute exposition that opens the album is unnecessary . . . just let the songs tell the story. And they allow ‘I’ve Got A Thing For You’ creep back far too close to bar band territory (though it’s probably dynamite done live).

The trio of openers, ‘Save Me’, ‘Bad Luck’ and ‘Not The One You Want’ are inclined to swagger, but the producer keeps them on the straight and narrow. All 3 spin around sturdy melodies and distinct contemporary rock stylings, and launch the album’s lyrical raison d’etre, running the gamut of rage, humour and resignation. The false hope of the protagonist in the scuzzy, sleazy rock’n’roll of ‘Paradise’ is almost palpable. But he pulls back from the edge of despair on ‘Out Of My Head’ and ‘Outer Space’, one an ELO/Elton John honky tonk pub rock sonata, the other a melodic rock stimulant, laced with acerbic humour.

‘Won’t Forget and ‘See Your Face Again’ are pulsating rock songs with a built in sense of compassion as Leddfoot’s mind continues to unwind. The blistering axe solos and exhilarating chord shifts suggest a stage-set rock opera in the making.

The album ends not with a bang but a whimper with ‘High Society’. Musically, it’s a high speed scuttle thorugh some springloaded riffs and drawling vocals, but lyrically, as the Doc recognises a woman he once knew, now a socialite and out of his league, he seems to accept than things, for him, will never change. 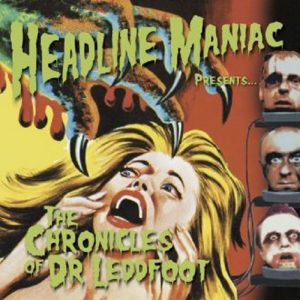