Formed in 2001 as A Day In The Life things really started to snowball for this Dayton, Ohio band when they changed their name to Hawthorne Heights. Rolling with every punch a fickle music industry can throw they have, nevertheless, continued to release a stream of solid albums the latest of which, The Rain Just Follows Me, stands as a career best.

Hawthorne Heights are a band on a mission and opening salvo ‘Constant Dread’ arrives in double-quick time. There’s little in the way of introductions or preliminaries; just a punchy riff that flits from speaker to speaker with a staccato swagger. While many bands of the Heights vintage are content to fall into the ‘heritage’ folder ‘Constant Dread’ evidences a band still pushing forward. If that was in any doubt then Brendan Murphy (yes, he of hardcore heroes Counterparts) adds an aggressive vocal to blow any pre-conceived ideas out of the water. While their last album (2018’s Bad Frequencies) took baby steps into new territory The Rain Follows Me takes giant strides. Long term fans needn’t worry as there’s no radical departure from the band’s core sound, those sudden sonic shifts and emotive vocals are ever-present, yet they’re delivered with a newfound confidence and some credit must go to producer Cameron Webb. He’s added lots of subtle nuances to the mix that’ll slowly reveal themselves on successive spins and ensures that this album will reward repeat listens and stay fresh for a long, long time.

Never a band to shy away from their melodic roots (if you need proof check out their cover of Cheap Trick’s ‘Surrender’) and the title track is an earworm of the highest order. If somebody ever asked you what’s so great about the emo genre, I suggest you play them ‘The Rain Just Follows Me’. It’s a nice jumble of opposites as the unclean vocals juxtapose the crystalline and loud sections act as a foil to the quiet. Shimmering like light fractured off water ‘Tired And Alone’ gradually adds layers to become a monolith that’s replete with choral vocals while the aptly titled ‘Thunder In Our Hearts’ is a song that spins the listener around, and the effect is quite dizzying and disorientating.

The Rain Just Follows Me makes few concessions to fads or popular trends and finds Hawthorne Heights doing what they do best. ‘Dull Headlights’ could have been released at any point in their career and I consider it a kind of musical steppingstone that connects the old school to the new. There’s a loose nautical theme running throughout much of this album, both musically and lyrically, and ‘Seafoam’ crashes like ocean waves on a shore. It’s a buoyant, bouncy slab of pop-punk that marries a contagious beat to whimsical lyrics (those tension of opposites again) and the result is a song that pulls the listener in two directions. Some throat shredding growls pepper ‘Words Can’t Hurt’ and sets things up nicely for closer ’Bambarra Beach (The End)’. A choppy number that often threatens to capsize it features vocals that are slowly drowned in a sea of sound and features a nice sting in the tail.

The Rain Just Follows Me is an album that Hawthorne Heights made for themselves, but it transpires that it’s an album for everyone. 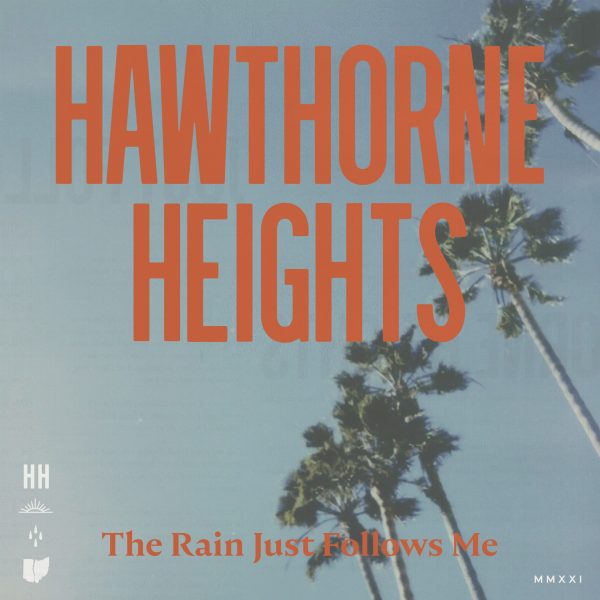