Hailing from Liverpool Decay haven’t travelled all this way to take prisoners. Their set begins at a frantic pace and rarely pauses for breath. Fronted by a hyperactive frontman who, when not hanging from the mic, displays some illegal karate kicks. A hard hitting drummer makes the ground quake as two guitarists create a wall of sound with barre chords. Inhabiting the middle ground between emo and post-hardcore they’ll appeal to fans of both genres equally. New track ‘Empty Feeling’  points to a bright future while old staple ‘Been Blue’ sets the bar high for the rest of the evening. 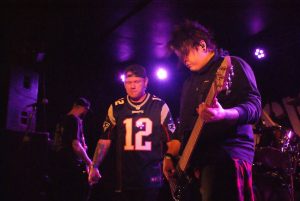 Like a tornado coming through town Like Giants hit the stage, a blur of nervous energy, and sweep up the unwary in their slipstream. Opening salvo ‘Beauty Queen’ sets out their stall as ‘This Town’ follows and proves them finest purveyors of pop-punk. Like Zebedee the band continually bounce as if on springs and ‘Right in the Childhood’ finds them making the first of many forays onto the barrier. ‘Juliet’ evidences a nice change of pace and gives the band a breather of sorts before ‘The Poet’ comes out swinging. An extremely likeable bunch of chaps ‘Cut and Run’ caps an enjoyable set and I’m sure they’ve made many new friends tonight. 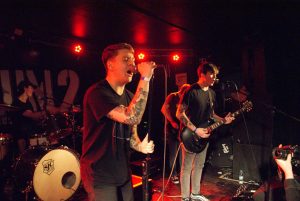 Something of living legends headliners Hawthorne Heights are a difficult band to categorise and on the strength of tonight’s performance it’s easy to see why. Successfully avoiding every tag, only ‘rock’ is a big enough umbrella to cover their sound, heavy and emotive songs are delivered with punk energy and a metallic punch. Time has been very kind to their debut album The Silence in Black and White and they begin with an almost complete performance of that record. Just as on vinyl ‘Life on Standby’ is an ideal opener and it sends the crowd suitably wild. ‘Dissolve and Decay’ and ‘Niki FM’ only increase the insanity as, in the live environment, Hawthorne Heights become an infinitely heavier animal. This is partly due to drummer Chris Popadak who beats the skins exceptionally hard and original bassist Matt Ridenour whose busy style adds a real depth. The warm hues of ‘Blue Burns Orange’ follows along with a speeding rendition of ‘Silver Bullet’. ‘Wake Up Call’ and an abrasive ‘Sandpaper and Silk’ are two incendiary tracks of the highest calibre as ‘Speeding Up the Octaves’ rounds out the album. 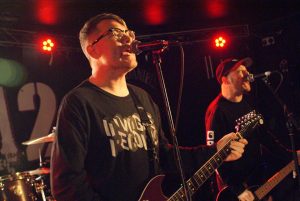 Still led by the irrepressible JT Woodruff and his unmistakable vocals ‘Where Can I Stab Myself in the Ears’ (from their sophomore If Only You Were Lonely) is greeted like an old friend as is a highly flammable ‘Crimson Sand’. The band are killing it tonight and give 100% with lead guitarist Mark McMillon interplaying nicely with JT’s rhythm guitar. Despite the fury with which the band throw themselves into their performance there’s still a strong song sensibility that reveals itself in a powerful groove. ‘Pens and Needles’ and ‘Saying Sorry’ bring us towards the end of the evening and it’s all gone by too quickly. There was a major omission from their performance of The Silence in Black and White and it’s with that song they choose to close. Like Sabbath with ‘Black Sabbath’ or Slayer’s ‘Reign in Blood’ it’s the only option to conclude the set and ‘Ohio is for Lovers’ ensures that Hawthorne Heights depart at the peak of their powers. 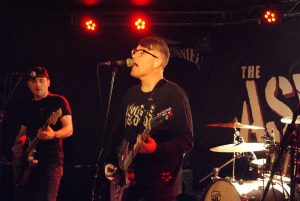 Words and photographs by Peter Dennis.