Rebellion Festival, the largest punk and alternative festival in the world, is returning in 2022 even bigger and better with the launch of new outdoor event R-FEST – the festival within a festival.

Confirmed to take place this coming 4-7 August 2022, in addition to Rebellion Festival at its annual home the Winter Gardens, R-FEST will be located slap bang in front of Blackpool Tower on the promenade, directly down from the Winter Gardens. The organisers are building an arena with the sea on one side and the town on the other, with a capacity for 15,000 punters and space for bars, food, and band merchandise.

Today, R-FEST can announce that English psychedelic rock legends Hawkwind will be joining R-Fest on Thursday August 4. Hawkwind replace The Wildhearts, who were originally scheduled to play this slot before The Levellers, but in light of their recent decision to take a break from performing, the pioneering space-rockers have stepped in to take their place.

Hawkwind are an institution who crossover many different genres and fans of music and their set is sure to melt the minds, and the sky, at R-Fest this year!

With Levellers, The Stranglers, Gary Numan and Squeeze all set to take headline positions, they join a host of other artists scheduled to play and R-FEST for the full line-up below.

R-FEST will quickly establish itself as the North West’s premier music festival and Rebellion Festival look forward to welcoming many fans that could be experiencing one of their events for the first time. We’re sure they will be welcomed by the Rebellion Family and soon realise why Blackpool is such a special place for our summer gatherings.

R-FEST is a standalone festival and day tickets are available at £50 per day. However, if you are a REBELLION weekend or REBELLION day ticket holder your ticket will get into R-FEST Free Of Charge! R-FEST is all ages and there is re-entry available.

Rebellion Festival also looks forward to hosting the best punk from around the world in 2022 with the likes of Sham 69, Bad Religion, Circle Jerks, Cock Sparrer and Stiff Little Fingers confirmed to play the Winter Gardens August 4-7 2022.

Head to www.rebellionfestivals.com/r-fest for all info and tickets. 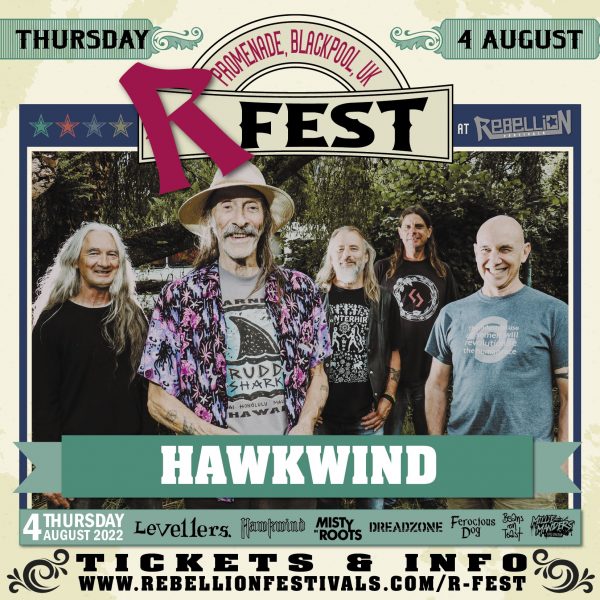