There have been many Hawkwind collections over the fifty plus years of their career as kings of space/ psychedelic rock, so does the world really need another? Well, Atomhedge/Cherry Red Records obviously think we do. Continuing their close association with the band built up over the reissue campaign as well as releasing Hawkwind’s new material including this year’s excellent Somnia album reviewed here they continue their 50th anniversary celebrations with the Dust Of Time: An Anthology (1969-2021) the ultimate career spanning collection with tracks harking back to the early Dave Brock and Hawkwind Zoo days and transporting us right up to the current day with their latest album Somnia. All wrapped up with a poster and a carefully prepared booklet including an exclusive interview with the ever-present Dave Brock.

Brock’s early solo effort ‘Bring it On Home’ opens the set, a cover of the Sonny Boy Williamson II blues number gets the ball rolling before a second rare track in the shape of Hawkwind Zoo’s ‘Sweet Mistress Of Pain’ this track would go on to become Hawkwind’s ‘Kiss Of The Velvet Whip’ on their first album. That first psychedelic album is also represented by ‘Hurry On Sundown’, the mesmerising instrumental ‘Be Yourself’ and ‘Mirror Of Illusion’ before the Hawks sound really gets established with the arrival of album number two In Search Of Space and the still classic ‘Master Of The Universe’ where the Hawkwind drone is at the fore and ‘You Shouldn’t Do That’ with it’s crazy Nik Turner saxophone accompanying that drone. Disc One closes with the three singles later added to the remastered versions of In Search Of Space including “that track” which everybody knows, ‘Silver Machine’ plus the Space Ritual (live) version of ‘Down Through The Night’ and “that track” that some people know the ever controversial Calvert led single ‘Urban Guerrilla’. Disc Two covers the period from Doremi Fasol Latido through to Warrior On The Edge Of Time or “The Lemmy Years” conveniently all packaged onto one disc. Strangely the ‘Motorhead’ track is conspicuous by its absence but the disc does include such stand out anthems like ‘Brainstorm’, ‘The Watcher’, ‘Paradox’, ‘Assault and Battery/The Golden Void’ and ‘Magnu’ expect heavy basslines and more manic sax throughout. The second instalment closes with the trippy ‘Spiral Galaxy 24968’ showing the band in full electronic freak out mode.

With Lemmy out and Paul Rudolph in (for one album only) Brock, Turner and Calvert moved onto founder member Nik Turner’s final outing Astounding Sounds, Amazing Music represented here by the sinister ‘Steppenwolf’, ‘Chronoglide Skyway’ and the full throttle ’Kerb Crawler’. Single ‘Back On The Streets’ shows them in total Quo mode before the more mainstream Quark, Strangeness And Charm (title track included) with tracks like ‘Spirit Of The Age’ where vocals were brought front and centre. They continued this approach for the release of their next album 25 Years On which was released under the Hawklords banner due to legal issues over the ownership of the “Hawkwind” name in 1978. ‘PSI Power’, the string heavy ‘The Only Ones’, the very ‘Silver Machine’ sounding ‘25 Years’ and a live cut of ‘The Age Of The Microman’ all prove that Hawklords are Hawkwind in all but name. Bringing the Robert Calvert years (and Disc Three) to a close PXR5 contained an odd assortment of tracks due to the fact that it was made up of both studio and live tracks recorded prior to the 25 Years On album but sticks to the same mainstream rock feel of the previous releases on ‘Robot’, ‘High Rise’ and the single version of the very punky ‘Death Trap’ which exit Disc Three along with a live track ‘Over The Top’ originally placed on the 1984 Independent Days compilation.

Disc Four sees Hawkwind moving onto the 1980’s and embracing the latest new wave sounds by kicking the new decade off with the Live ‘79 album (two tracks are included here) which introduced Hugh Lloyd-Langton on guitar and Harvey Bainbridge on bass/keyboards and grabbed the attention of the increasing NWOBHM audience. Now signed to Bronze Records for the live album and its follow up Levitation which saw yet more changes to the line-up as Calvert exited the band and Ginger Baker took to the drum stool, it also found the band going up against Ace Of Spades by a certain Lemmy fronted Motorhead and losing out in the UK charts (Ace Of Spades reached #4 whereas Levitation only achieved #21). This album and it’s follow-up Sonic Attack were probably the most commercial of their career with the more mainstream sound of Levitation’s title track along with ‘Motorway City’, the track which gives this release its title ‘Dust Of Time’, singles ‘Who’s Gonna Win The War’ and ‘Angels Of Death’ plus ‘Virgin Of The World’. However, with a relatively stable line up the next couple of albums became a little formulaic with new live favourite ‘Arrival In Utopia’ standing as an occasional glimmer of hope amongst fairly average Hawkwind fare despite Turner’s brief return for 1982’s Choose Your Masques.

Five disc’s in and we arrive in the mid 80’s and albeit with lower sales the Hawkwind live juggernaut ploughed on and many of the periods live favourites feature here. ‘Needle Gun’ with that classic punk attitude and ‘Zarozinia’ from The Chronicle Of The Black Sword are fine examples of this along with live versions of ‘Moonglum’ and ‘Magnu/Dreamworker Of Time’. If nothing else this collection shows the ever-changing face of the band’s music and a great demonstration of this is the gently building instrumental ‘Cajun Jinx’ before we are taken on to The Xenon Codex with special note paid to the Radio One session pairing of ‘Tides’ and ‘Wastelands Of Sleep’, through Space Bandits and onto early 90’s high point Electric Tepee for ‘L.S.D’. By the time we get to the sixth disc the pace quickens with only a maximum of two tracks per album from the later period and some missed completely. Covering fifteen albums within only twelve tracks makes this very much the cherry-picking part of this project. Despite covering the twenty nine years spanning Electric Tepee through to this years excellent Somnia album there really is some top drawer material included on this final CD from the eastern beats and chaos of ‘Space Is Their Palestine’ through the Meninblack/Pinky and Perky and Dalek voices of ‘Alien I Am’ and ‘Sputnik Stan’ and onto their latest offering ‘Strange Encounters’ with its frantic drumbeats, these travellers in time, no matter how many crew changes take place, always manage to stretch the edges of the black hole without leaving their own galaxy.

There is no doubt that Hawkwind have continued to influence music throughout their extensive career from the Sex Pistols and Buzzcocks of the 70’s punk/new wave movement through Ozric Tentacles and onto Public Service Broadcasting’s extensive use of spoken word passages but they have sometimes not been given the credit they deserve from the generations of music listeners. Hopefully the current glut of material surrounding the landmark anniversary will in some way balance that injustice. For those without the stamina for the full six-disc Hawkwind experience there is also a compressed two disc, 19 track cop-out version, but this (besides a couple of newer tracks) only really skims over more familiar territory. Fifty years in eighty-one tracks is more than enough editing for this Hawkfan. 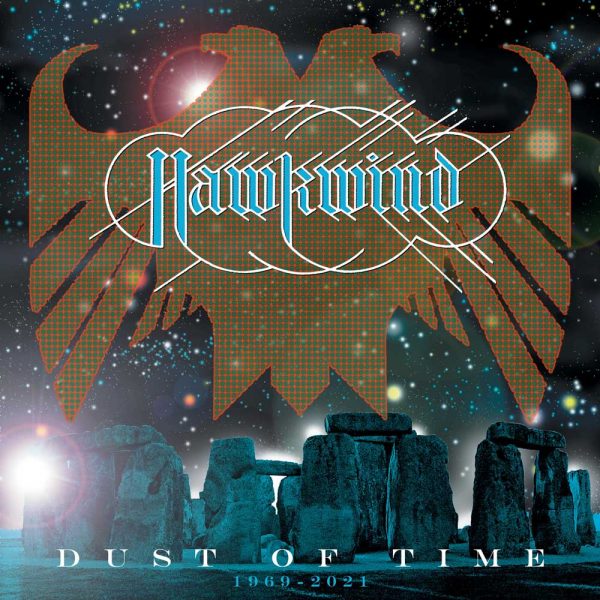