Hawkwind have now been at it for fifty years. Fifty years. Fif. Tee. Years. Years! That’s a bloomin’ long time. Longer than most of the population have been on the planet. And in their time on – and off – this planet, Hawkwind have released 31 studio albums, 11 live albums, 15 compilation albums, 8 EPs and 22 singles. Yep, they’ve been pretty busy. And so 2019 brings us album number 32, All Aboard The Skylark, nine tracks of tight, psychedelic grooves showcasing the talent that the band as individuals and as a collective possess. Accompanying this release is a bonus disc, Acoustic Daze, a reminder that when the special effects, the swirls, and the psychedelics are removed, Hawkwind write damn good tunes.

Anyway, on to All Aboard The Skylark. Human flesh-devouring space aliens populate the acid landscape of opener ‘Flesh Fondue’, a veritable feast of psychedelic sounds and echoing bubbliness. And just before we can fall to the ground from on high, along comes ‘Nets Of Space’, a dizzyingly delightful wash of soft warm swishes, tinkles, splashes and moon-lit vibes. In the ‘real world’, we might not be the deeply ensconced in the dippy trippy 60s and 70s, but in Hawkwind’s world, we are. Given the choice, I suspect we would all rather be there. The acoustic splendour of ‘Last Man On Earth’ is sprinkled with space dust and peppered with a cool stellar sauce that slides down nicely before we are once again cast off in to the dreamy and occasionally jazzy juicings of ‘We Are Not Dead…Only Sleeping’.

From the gentle pulsating groove and opulent glow of the title track through the tie-died time travel of ‘65 Million Years Ago’ that takes us back to the dawn of time ambience of ‘In The Beginning’, the album takes us on a journey that is as entertaining as it is soothing. That journey continues with the relaxed groves and spaced out psychedelia of ‘The Road to…’ that comes to an epic close with ‘The Fantasy of Faldum’. Based on Herman Hesse’s short fairy tale, the story offers an exercise in spiritual detachment and allows its reader to gain perspective, and understanding, of what’s really important in life. I mean, it’s not unlike Hawkwind to go all spiritual and deep and meaningful, man, on us, now is it? It’s obvious, isn’t it, that this, and every other, society will ultimately disappear in the indifference of time and so our existence and all our endeavours are ultimately vanity projects? Whether you want to laugh or cry at the absurdity of it all, Hawkwind have provided a rather splendid soundtrack to our collective voyage. All aboard! We’re off. And Hawkwind are at the wheel.

All Aboard The Skylark 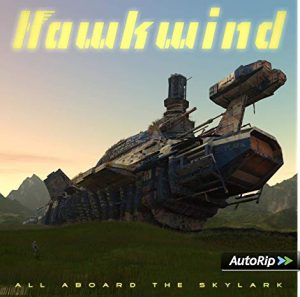 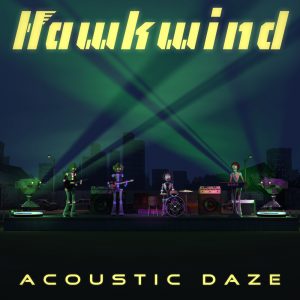