Since their inception in 1994, Connecticut bruisers Hatebreed have blazed a rampaging trail across the metal world. Countless festival appearances, global shows, six critically acclaimed albums and a Grammy nomination later, the quintet look set to cement their status as pioneers of the scene with The Concrete Confessional.

Record number seven is full throttle from the get-go with opening track (and first single) ‘A.D’ setting the ferocious tone. Frontman Jamey Jasta’s visceral screams of “Fight fire with fire / you’ll see everyone’s burning” during this scathing exploration of the modern-day American dream, are indicative of a musician who’s fed up with the material bullshit. The frustration may be palpable in his vocals, there’s no mistaking the power or purpose in their delivery. ‘Something’s Off’ allows Jasta to show off his musical chops and veer (albeit seamlessly) between clean lines and guttural barks – those subsequent choral chants of “OFF! OFF!” are guaranteed to get fists pumping and incite pits in a live setting.

There are instances during this album where you could be forgiven for believing it spewed forth from the raging bowels of the Bay Area – the thrash sensibilities are pervasive and reminiscent of Reign in Blood-era Slayer at times.  That said, the five-piece’s trademark old school brutality is unmistakable on tracks like ‘Dissonance’ and grit-laden ‘Us Against Us’, before stepping back in time and revisiting their hardcore roots on pummelling riff / gang vocal combo ‘Walking the Knife’ – a savage belter which even serves up some brief blastbeats for your aural pleasure. Having never been artists shy of delivering a good slogan or political statement via their music, ‘Looking Down the Barrel Of Today’ is the epitome of such intent – and after a few listens on repeat (the machine gun chug on this earworm proves irresistible), proves to be as uplifting as it is explosive.

Relentless and gloriously unapologetic right up until that final note has faded to black, The Concrete Confessional successfully juxtaposes vitriol and vitality to create an album which is equally chaotic and catchy. All killer and zero filler – the only sin here would be to dismiss these guys as mere sloganeering noise. From grace Hatebreed have definitely not fallen. 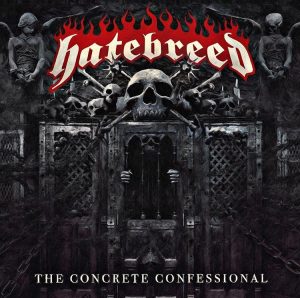