The track has already received international airplay and premiered on Kerrang! Radio last month. On the topic of the album, bassist Casey Stead had this to say: “Plight Of The Millennial is a call-to-arms for a disenchanted, disillusioned, and frustrated generation. It delivers bursts of angst and cynical social commentary in a climate where people are more than happy to reduce serious issues to the realm of memes, or witty banter, for the sake of a cheap laugh.”

As modern hardcore seems to be becoming more insular, “POTM” subverts the trend. Listening to this record is like seeing the world through the eyes of a rebellious youth and concluding: “shit’s just worse than ever”. 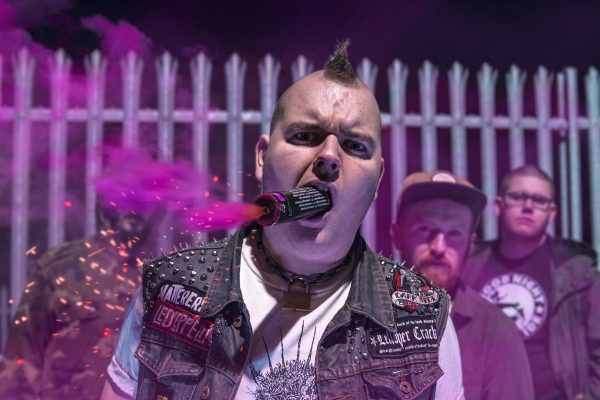 The Smiling Assassin is a so-called friend who is really an enemy whose main weapons are inconsistency and unpredictability. They use rumour to undermine colleagues and adopt a passive-aggressive, indirect, dishonest style of dealing with people and issues. Basically, this is a friend who stabs you in the back.

The group has been gigging consistently since September of last year and has gained a dedicated following around Yorkshire thanks to honest, explosive and intense live shows. With a great sense of brand and the intention of being a voice for the voiceless in the UK punk scene, Smiling Assassin immediately hit the studio to begin work on their debut album, Plight of the Millennial, quickly finding a home for it at Warren Records.

Smiling Assassin’s intention is to shed light upon some of the issues that people are facing in 2020. Vocalist George Garnett has said of the record “With this album we’re trying to put a breath of fresh air into the modern punk scene and shed light on the real issues and difficulties our generation face today.”