The Moth in the spotlight

German sludge trio The Moth were in Birmingham recently supporting Samothrace at The Rainbow (reviewed here). Paul Castles caught up with them to learn exactly why the UK really is the light that The Moth are drawn to. Pics: Rich Thompson

Welcome back to the UK guys. Last time around you were supporting Conan, what memories have you got from that tour?
Cécile – That was our first time in the UK and we loved it. We weren’t even back on the ferry at Dover and we had decided we wanted to come back as soon as possible. Everyone was so supportive of us and we were made to feel really welcome. The whole scene in the UK is totally different to that in Germany. The bands are really close and friendly and for us it felt like we had been welcomed into the family.
Freden – We’ve put this tour together ourselves, it’s all DIY. But it has been made easier because we kept in touch with several of the promoters from last time. In fact many of them have been putting us up after gigs which keeps our costs down and just shows how kind and nice everyone is over here.

The highlight of your 6-date visit this time was appearing at Desertfest in London. Tell us how that went?
Cécile – “It was just amazing. We played Desertfest in Berlin two years ago but that was nothing on the scale of the UK version. It was a dream to play Desertfest in London where we played at the Black Heart in Camden. Everyone starts at the Black Heart! The only issue on the night was that we had a problem with an amp during the first song. We were singing and playing but no sound came out! Once we switched the amp over it was fine. We had a really great response.
Freden – It was packed in there like a steam bath. We had to leave right after playing which was a shame. We came back hours later and were just standing at the bar and people kept coming up offering to buy us a drink.
Cécile – It was great we had a few drinks and didn’t even have to pay! The only problem was when I asked for a ‘whiskey cola’ I ended up with a ‘whiskey soda!’ In Germany the fans are a bit more reserved, they like you but they don’t tell you. There’s more passion in the UK with the way they react which is why we feel more love here. 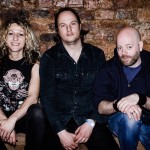 Your debut album, And Then Rise, came out on This Charming Man Records last year. What are your thoughts on it now?
Cécile – Yeah, we were pleased with the reaction it got. We had some great feedback, more than we hoped for really. The first press we were not 100% satisfied with the sound. We were happy with the song writing but just not the final version of the song so we ended up getting it remastered by Chris Fielding at Skyhammer Studios. We couldn’t go there in person but just sent him the tracks and told him what we were after. He really understood what we wanted and we were pleased with how it came out, quite a bit different to the first version.
Freden – I think in the UK some of the guys like Chris who are mixing albums seem to understand more about what the bands are trying to achieve. That is not always the case in Germany where people in the studio don’t always appreciate what sound we’re trying to create with our music.

What other live dates have you been busy with recently?
Cécile – We played at Droneburg in Hamburg. There were a few good bands playing including Downfall of Gaia who come from Hamburg like us. The scene could be bigger in Hamburg and sometimes the turnout is poor. We’re looking at a possible Scandinavian tour and we also hope to play Berlin Swamp Fest which is a three-day event in September. 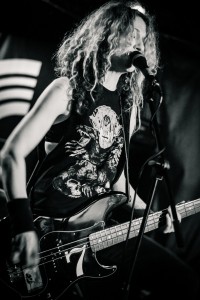 I spotted your name on a recent covermount CD with Metal Hammer?
Cécile – Oh yeah, that was great! That was actually a big surprise. The track was the remastered version of ‘Fire’ off the album. It certainly boosted our Facebook ‘Likes’. Normally every month it’s a few up, maybe a few down. When that disc came out it was like whooah! They shot up!

So have you begun writing any new material this year?
Cécile – Oh yeah, we’ve been working on loads of new material. We had some songs that couldn’t fit on the first album so they’ve already selected themselves for next record. The sound is getting a bit darker now, I’ve tuned down to C, so it’s a little heavier. Hopefully we’ll be able to get Chris Fielding involved from the start this time as it’s so hard to get the sound you’re after on record. The mixing guys in Germany don’t have much idea about technical capabilities. The sound ends up too clean, with us it needs to be dirty!

Just give us an insight into how the songwriting process works with The Moth in terms of who does what?
Cécile – Me and Freden put the songs together, working on the riffs, then hand to Tiffy to add the drums
Tiffy – For me it is always hard first time as I don’t understand anything they’ve done! I can’t count 1,2,3,4 like in my rock ‘n’ roll life before. I need time to get into it but then it is perfect!

You’re clearly all close. How long have you all known each other?
Freden – We went to school together and actually started our first band then called Satan’s Claws. We didn’t make it to actually playing a first show though. We split before! Then we had a band called Bangkok Cash and did make some records and toured a bit. There was then a break of around 10 years before we thought about giving it another go in a new band and that’s when we started The Moth.
Cécile – Things have totally surpassed our expectations said give it another go after previous band broke up. We were determined to follow this path in music so said let’s try it once more.