If your only exposure to Gypsy was their two United Artists albums, you’d be forgiven for thinking they hailed from America’s West Coast. Formed as Legay in Leicester, 1965, a name change found them adopting a sound that was more akin to San Francisco than the East Midlands. Geography aside, their two long players (collected here as Comes A Time; The United Artists Recordings) are a pair of underrated gems and stand tall as some of the best music from the early ‘70s.

After supporting a fledgling Led Zeppelin and making history at the Isle of Wight festival (performing twice on the same weekend) the scene was set for Gypsy’s eponymous debut album. Released in 1971 Gypsy got off to the best possible start with the rebel rousing ‘What Makes a Man a Man?’. Full of angular guitars and replete with handclaps it’s a raucous number that demands your full attention. Rod Read’s vocals have a touch of Captain Beefheart which only adds to the exuberant atmosphere which I’m sure, back in the days of vinyl, had the needle jumping from the groove. After the boisterous opener ‘Keep on Trying’ is an earthy number that acts as a soothing balm. With three of the band providing vocal harmonies to compliment Read’s voice (guitarist Rodin Pizer, bassist David McCarthy and keyboardist John Knapp) a lush a textured sound is created which is most evident on the McCarthy penned ‘I Don’t Care, Do You Mind?’.

Imaging Neil Young fronting Creedence Clearwater Revival and you’d have something approaching the brilliance of ‘Turning Wheel’. It’s the type of song you wish would continue indefinitely and with soaring guitars it’s very evocative and would make the perfect companion on a desert road trip beneath a bruise-coloured sky. ‘Feel About the Country Fine’ teases the listener before landing the knockout blow while ‘Standing Alone, Feel So Bad’ captured some of the band’s live prowess and it’s chuggy riff threatens to blow your speakers. Gypsy then starts to run out of steam with a couple of wishy-washy songs, but the last two tracks set the band back on course. With chiming guitars ‘Let Me Take You Home’ soars like an eagle caught on the breeze while closer ‘Pony Ride’ is a fun fuelled romp very much in the vein of early Quo (if they came from the Deep South).

The A and B-sides of 1971 single ‘Changes Coming’ are added as bonus cuts and the A-side is a call to arms that was banned by the Beeb (always a good sign) for being too political while the flip side delivers ‘Don’t Cry on Me’ with a real Country twang. Both tracks are a welcome addition and make a great album greater.

CD Two: Brenda and The Rattlesnake

Following their debut album by a mere 12 months Gypsy’s sophomore effort Brenda and the Rattlesnake continued the good work with and with Ray Martinez replacing Rod Read the band continued their exuberant take on American music. The band would later lament their embracing Americana yet there wasn’t a group from that era who didn’t borrow something from across the pond whether it was The Who aping Tamla Motown or Zeppelin pillaging the blues. Gypsy were a little more honest about their influences and while much music from the early ‘70s sounds of its time Brenda and the Rattlesnake sounds timeless. ‘Brand New Car’ is the strong opener and evidences a fuller sound that’s augmented by strings and horns. Picking up where Gypsy left off ‘Brand New Car’ is a fine slab of good time boogie and foreshadows what’s to come.

Proving they do sparse just as well ‘Midnight Fighter’ strips away all the bells and whistles and brings melody to the fore. Overall, this album relies less on atmospherics than its predecessor and while all the songs are of a high standard there’s no standout track like ‘Turning Wheel’ to illuminate the record. The production is a bit lightweight and tracks like ‘Shame’ would benefit from more on the bottom end as the drums lack the requisite punch. Arriving like a gang of grizzly bears ‘Let’s Roll’ is given an almost glam vibe with lavish brass and barrel organ piano. Brenda and the Rattlesnake flags as it reaches its conclusion, but closer ‘Comes a Time’ rallies the troops and coupling swirling guitars with a driving beat ensures Gypsy depart on a high note.

Due to poor sales Gypsy lost their record contract and eventually split-up. Criminally underrated but time has been very kind to both Gypsy and Brenda and the Rattlesnakes and even after half a century they stand up very well. Hopefully, Comes A Time; The United Artists Recordings will give Gypsy due credit and their time will finally come.

CD Two: Brenda and the Rattlesnakes 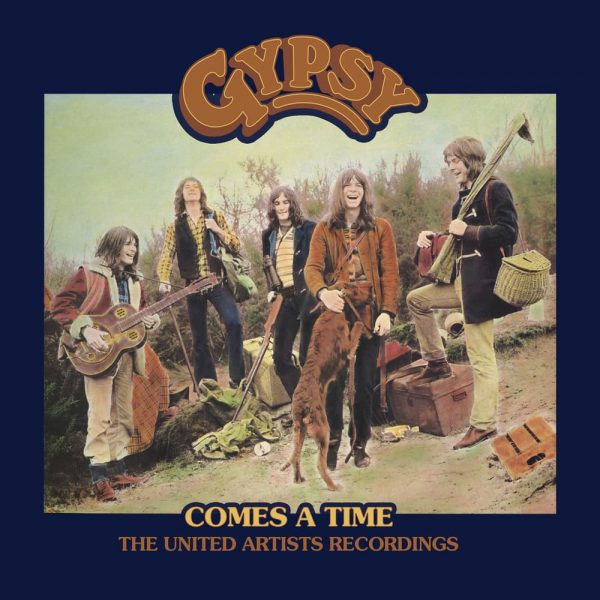