Global pop icon P!NK is back in the UK for two huge shows at American Express presents BST Hyde Park on Saturday 24 June and Sunday 25 June, plus further huge UK outdoor shows as part of a 2023 European tour. 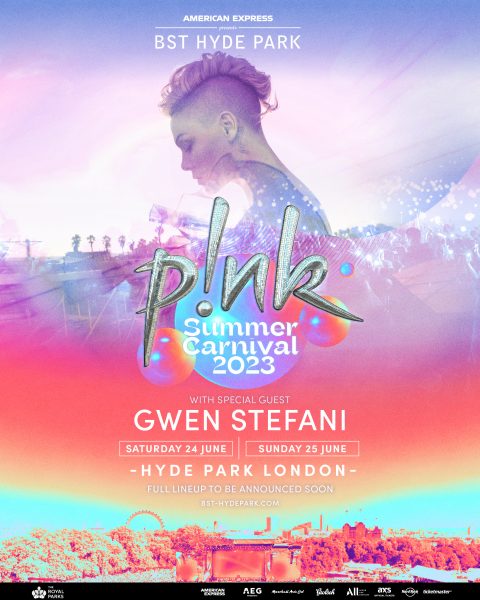 Today, we are delighted to announce that global superstar Gwen Stefani will join P!NK at Hyde Park this summer. A multiple Grammy Award-winner, Stefani has achieved global success as a songwriter, performer, iconic frontwoman of  No Doubt, and as a multi-platinum solo artist. She has sold more than 60 million records worldwide including her four-times platinum debut solo album Love. Angel. Music. Baby. – that delivered the hit singles “Rich Girl,” “What You Waiting For?” and the Pharrell Williams produced No. 1 hit “Hollaback Girl.”  Her sophomore album, The Sweet Escape, featured the Billboard Hot 100 top 10 single “Wind It Up” and the unforgettable anthem “The Sweet Escape.”  Her critically praised latest album, This Is What the Truth Feels Like, debuted at No. 1 on the Billboard Top 200 album chart and includes her powerful No. 1 single “Used To Love You.”  In 2020, Stefani had two No. 1 hits on Billboard’s Hot Country Songs chart with husband Blake Shelton, “Nobody But You” and “Happy Anywhere.”

Known for her charismatic stage presence, Stefani premiered her exclusive Las Vegas headlining residency “Gwen Stefani – Just A Girl” in 2018, from which she released a compilation of the same title in 2020. With its setlist composed of fan favorites and iconic hits, the show unfolds as a visual marvel for fans, putting a fresh twist on classic Vegas theatrics. Now she’s bringing a taste of the spectacular to London for the first time ever!

Gwen says: “I don’t think I would ever be me without the incredible musical influences of the UK. I am so excited to be back! This is going to be an amazing show”

P!NK will bring her immensely powerful voice and high octane live show back to UK shores for the first time since 2019’s phenomenal sold out Beautiful Trauma World Tour. In a London exclusive performance, P!NK joins previously announced Bruce Springsteen and the E Street Band, Billy Joel, Take That and BLACKPINK as the other headliners already announced for 2023’s BST Hyde Park.

P!NK says, “It’s been a long three years and I’ve missed live music so so much…. So it’s finally time! I am so excited to get back to the UK and Europe to sing, cry, sweat and make new memories with my friends. It’s going to be magical!”

Renowned for her undeniably breathtaking live shows with colossal production, teamed with her world-class talent, P!NK’s Summer Carnival 2023 will be yet another impressive landmark in her already phenomenal career and a truly unforgettable live experience for fans. Expect iconic songs and newer hits from her upcoming album Trustfall including the euphoric “Never Not Going To Dance Again!” and the protest anthem “Irrelevant”.

Summer Carnival 2023 will start with two nights at the University of Bolton Stadium, Bolton, before two nights at the Stadium of Light, Sunderland and one night at Villa Park, Birmingham. Her final UK performance will be as headliner at London’s iconic Hyde Park as part of American Express Presents BST Hyde Park.

Describing P!NK’s 2019 tour which included 27 spectacular sold out shows across the UK and Europe, The Guardian said “The star condenses the energy of an entire tour into a single show that’s a riot of circus athleticism and crowd-pleasing hits”.