When it comes to support bands crowds can sometimes be very blasé and won’t make a show until the headline act appears. Therefore, it’s testament to the buzz surrounding Torus that when they take to the stage and the first chord of ‘Between The Lies’ rings out its received by a full house. Hunkering down during the pandemic has strengthened their resolve and tonight they lock in tightly like a series of interconnected cogs. If you want to know how heavy three musicians can get then just listen to the bowel loosening rumble of ‘Halo’. With riffs seemingly excavated from the very depths of hell Torus are a combo who pack a punch and proceed to clobber the first few rows with some hefty power chords. Just when you think things can’t get much heavier, they drop an octave for ‘Did It Again’ and descend even further for ‘Sail’ (the title track from a highly anticipated EP, due to hit the streets soon). Certainly not for the faint-hearted Torus are riding the crest of a wave and the brutal ‘Hurt You’ caps a near perfect set.

Another band very much on an upward trajectory are folk metal maestros Green Lung. For those of us who grew up with a penchant for classic rock and Hammer horror films Green Lung are like a breath of fresh air. Reassuringly familiar they may be but they’re no mere copyists and it’s easy to hear why their unique amalgamation of stoner, folk and NWOBHM has adhered them to a wide audience, as evidenced by tonight’s sold out show. ‘The Harrowing’ made an eerie opener to the band’s latest album Black Harvest and it serves a similar purpose tonight, especially when coupled with ‘Old Gods’. There’s something of a Pagan ceremony about tonight’s performance as vocalist Tom Templer throws his arms open wide to welcome us all to this sacramental rite. Bathed in demonic green light (naturally) the band launch into ‘The Ritual Tree’ and proceed to cast their dark spell over the venue. This is exactly how metal should be played, with heathen heaviness and lashings of faux occultism. 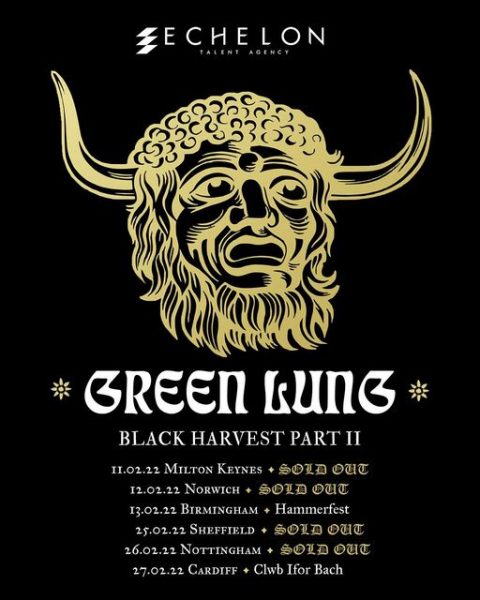 Getting a live debut is ‘Born To A Dying World’ (from their sophomore album) and, ululating between ethereal and crushing passages it injects a nice change of pace and is sure to become a set staple. Green Lung swing with that Sabbath swagger and that’s primarily due to the tough-as-nails rhythm section. Drummer Matt Wiseman in particular hits the skins particularly hard yet he’s not afraid to use the cowbell (always a winner in classic rock circles). As you’d imagine the arrival of ‘Initiation’ causes all sorts of havoc to erupt in the crowd…and to hell with social distancing. Green Lung leave the stage to rapt applause but of course they return for two well deserved encores. Guitarist Scott Black teases the crowd with a few bars of ‘War Pigs’ before launching into ‘Woodland Rites’ which segues nicely into closer proper ‘Let The Devil In’. On the strength of tonight’s performance, I don’t think Green Lung will be playing medium sized venues for much longer and I can hear the stadia beckoning.