All hail the Wheatley’s – both the late occult novelist Dennis and contemporary rural horror film-maker Ben. If either of them were looking for the perfect musical accompanist to their folk-horror endeavours they need have looked no further than London five-piece Green Lung, whose music stumbles blindly, bloodied, from a dark, ancient wood, wide-eyed from witnessing untold horrors.

‘Black Harvest’ is their second album, following on from 2019’s brilliant ‘Woodland Rites’. This release expands upon the template laid down by their debut, upping the ante, expanding their sonic palette, increasing the sound and scope of their already impressive vision.

Recorded in rural Wales, this has a folk vibe running through it. All samples used in the album were sourced from the local countryside, including a church organ which is heard throughout, and instruments found in the studio. The album was also recorded in late Autumn which gives the album a colourful hue – fading light, falling leaves, that kind of thing, man.

‘The Harrowing’ gets the ball rolling with some very ‘Wicker Man’ style vibes. “Come up to the hill, where the leaves begin to fall” intones a sinister voice before some frankly huge guitars join the fray. There are subtle hints of Brian May amid the aural chaos. This, my friends, is very, very heavy folk metal.

And then we’re off into the album proper. Galloping, groovy riffs, sleek, cool yet informed with a definite retro feel, there is an instantly unique sound and feel to what is going down. As other, smarter folk than I have noted already, this is a sound akin to Black Sabbath with Brian May employed as a second lead guitarist. It’s also redolent of ‘Ethereal Mirror’ era Cathedral, the drums pound, the keyboards swirl and the guitars roar.

‘Leaders Of The Blind’ sounds like prime Deep Purple, except, y’know, loads heavier. It’s vaguely Proggy and yet not at all Prog, it’s something else entirely. There are massive Jon Lord style Hammond organ flourishes and Hetfield-esque precision brutality. ‘Reapers Scythe’ adds Uriah Heep, Atomic Rooster and NWOBHM to the mix. it’s an atmospheric, eerie adrenaline rush of a thing. It’s retro, yet modern, timeless, yet utterly now. And it fucking rocks.

The pace drops for the bucolic acoustic intro to the brilliant ‘Graveyard Sun’. Based on the media sensation surrounding the folklore of the Highgate Vampire in the 70’s, this is a mini epic. Stop/starting between Tull-like wispy acoustic and metal wig outs powerful enough to fell trees, it’s one of the metal tracks of the year – brilliant, epic and gloriously ambitious. Oh yeah, and heavy.

And on it goes, just getting better and heavier still. The title track is a bullet belt donning instrumental, giving you a chance to catch your breath and realise that this is a proper, old school album, made to be listened to all the way through, to take you on a phantasmagorical journey.

It also becomes a Hammer movie set to music. Thundering on, becoming increasingly intense, the Hammond locking in mercilessly with the uber heavy twin guitar assault. ‘Doomsayer’ (great, none-more-heavy title) is possessed of a blues metal riff even heavier than, well, their last riff. It powers forward relentlessly before dropping down into a seriously Doomy groove.

The final track, ‘Born To A Dying World’ sees the band flexing it’s creative muscles. There’s that church organ again, ushering in a melodic, dark hymn – a lament for a planet on life support. It’s folk meets metal meets gospel, a fearsome eco-roar that ends with a moment of quiet reflection and realisation that “no one will save us from ourselves”. Green Lung deserve to be huge and maybe, hopefully, this album will give them the push towards the stratosphere that they deserve. A strong contender for album of the year.

Released by Svart Records on 22 October 2021 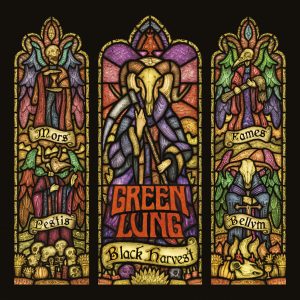