Just When You Thought It Was Safe…

The road back from the eighties is jammed up with bands who think they still have something to offer or who simply aren’t paying attention. It’s a road littered with casualties, but sometimes it’s lit up by new recruits who very occasionally add more to a band than existed in the first place. Like Great White and Terry (XYZ) Ilous.

It’s taken 2 albums for band and Ilous to find the fit that works. The turbulence created in the wake of the band’s split with original vocalist Jack Russell has dissipated. The songwriting now is stronger, up there with the high calibre stuff they were producing in the eighties. The songs won’t win Pulitzers or Grammys, they’re just honest, melodic rock songs in shades of blues, carved from experience. Original band producer, Michael Wagener ably assists them to carry off that rare slight of hand in making the music sound both fresh and familiar.

The heavy duty turmoil of the band’s recent years is answered on opener, ‘I’m Alright’, though Ilous’ phrasing could easily pass him off as a post Autograph Steve Plunkett. But it’s the undiminished prowess of the Kendall/Lardie twin-axe axis that carries the album. There’s a precision and depth to their playing that ebb and flow like a tidal machine, rising on the powerful bluesy stomp of the CCR like ‘Moving On’, then cresting a rising swell of brass on the pumped ‘Moonshine’.

There’s polish here, but there’s always been polish applied to Great White. No matter the rootsy references to Led Zeppelin and AC/DC, the band’s music has always been buffed up, chart aimed, Whistle Test ready. ‘This Is The Life’ and ‘Big Time’ are probably the picks, compact, tight as a drum rock songs with deceptively simple set ups and tuneful, charmingly dated, shout it out loud choruses.

Great White never were just a blues band. Or just a rock band. They staked out the middle ground, fertile territory that yielded some outstanding songs and durable albums. And here, very successfully, they’ve done it again.

The album closes with ‘Never Let You Down’, a sensuous, sinuous, sleazy blues rock lament, layered in meaning, a statement of intent as much as a promise. 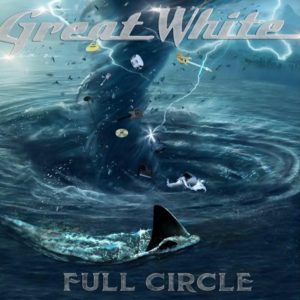