Starting this Wednesday (4th November), Great Music Stories will be launching a new afternoon series that will air 12-4pm every day during the second lockdown which was announced at the weekend. 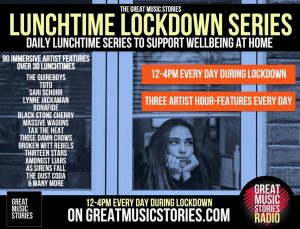 Back in March, Great Music Stories launched a new (not for profit) internet radio platform from a rickety rock caravan, a spontaneous reaction to the pandemic and venues closing in March. The hasty assembled project was specifically aimed to help keep new and rising bands visible during a national crisis and to provide engaging radio that would help people in home isolation to get through tough times. Since the summer, the station has offered a full day’s radio every Friday, with magazine features every other weekend.

The new 30-day series that will air every day 12-4pm will see three feature hours on rising and established bands airing every day. The output will feature new material plus milestone interview features from the Great Music Stories six-year archive, which has chronicled the stories of hundreds of rising bands through more than 900 interview hour specials and 2000+ interview shorts.

GuyB of Great Music Stories comments: “In recent months, we have all focused on supporting artists, venues and industry professionals at an unprecedented time. The aim of our new season for November is to help people – fans, music lovers, artists – to get through the tough days of lockdown. From the last lockdown we all became aware of the mental health and economic impact on people, but our own market research at the time revealed that music really helped many people to get through the days of home isolation.“

“With so many established grassroots rock radio shows traditionally scheduled for the evenings, lockdown has changed the dynamic. For many people, it’s the daytime hours when radio can really help – the long hours when people are working from home, alone or separated from their loved ones. Very deliberately, the focus for our new season will be on those long daytime hours, and a focus on immersive artist interviews – discussions that can bring humour, can entertain and can stimulate reaction. This season is about people: keeping artists – as people – in front of fans through very human stories, and also scheduling programmes that can brighten people’s days at home during lockdown. As a grassroots scene we already have an exciting mosaic of evening radio shows which people should support. I don’t want to cut across this, rather lockdown calls for attention on the daytime hours.”

The month-long season will feature 90 artist interview hour specials aired over 30 days, some new and some milestone broadcasts since 2015 that have not previously been available on listen again. Some of the artists to be featured during the season include: Amongst Liars, Massive Wagons, Tax The Heat, Those Damn Crows, As Sirens Fall, Toto, The Quireboys, Marillion, Thunder, Thirteen Stars, Bonafide, Mason Hill, Aaron Buchanan, Black Lakes, Bastette, Jack J Hutchinson, Broken Witt Rebels, Little Brother Eli, Black Lakes, Lynne Jackaman, Mike Ross, Vice, DeadBlondeStars, The Dust Coda and many more.

Despite the move into daytime broadcasting during lockdown, the long-standing Friday rockshow will continue on Friday evenings; on these Fridays. Dave Ritchie from Wildfire Festival will take the reigns for the Friday lunchtime broadcast.

The new initiative is supported by two pieces of market research for Great Music Stories  – commissioned during lockdown and a few months later as the country adjusted to the ‘new normal’ in September. Whilst by September, 56% of people said they were avoiding music venues to minimise the risk of Covid, 21% of adults said they had been buying CDs and vinyl online, and music had helped their wellbeing during isolation. Further with 33% of adults saying they listened to radio each day, and with 50% looking for good or uplifting content to help keep spirits up, Great Music Stories resolved to programme a daily run of immersive artists interviews to do something positive to help people cope with a second round of isolation for November.

The new series, airing daily 12-4pm on greatmusicstories.com builds on a number of milestones for the new station since it launched as the first wave of lockdown started. This includes a 30-day lockdown interview series through April, a 20-part mental health series and more recently, a series on the stories of working musicians during the ‘new reality’ in the autumn. The station also aired two full-weekend festivals over the Summer – Spirit of Wildfire and the Wellbeing Festival – which drew original sets from 170 acts. All these practical initiatives have been intended to support the scene at a critical time.