This is gonna be good. Warren Haynes and his band have finally decided to record a blues album, live in the studio, to 2″ analogue tape on vintage instruments and gear. Blues has always been one of the foundations of Haynes’ sound but blues fans will be rubbing their hands with glee at the prospect of this.

And straight out of the gate we have a killer Elmore James slide riff and the short but sweet ‘Blues Before Sunrise’. There’s some nice, overdriven harp and it’s all just the right side of distorted. We’re off and running.

Haynes then begins to mix styles and arrangements, this is not a one-note album. ‘Hole In My Soul’ adds classy horns while Hammond organ is all over ‘Wake Up Dead’, giving the track a thick, heavy, Deep Purple vibe.

Now, I don’t know what a heavy load blues is, but ‘Love Is A Mean Old World’ is, to these ears, exactly what it should sound like. It’s dirty, angular, it stomps, rattles and clanks. There’s a woozy slide solo and some dusty honky tonk piano. The production is brilliant, recalling ‘Bone Machine’ era Tom Waits.

And then we have an actual Tom Waits song, the brilliant ‘Make It Rain’ (see above). Ok, so it’s not quite as good as Waits himself because, y’know, who is? But it’s given a slow, swampy makeover, tweaked to turn it into a proper blues.

What else do we get. We head off into a seriously funky jam with the ‘Snatch It Back And Hold It’ medley. It’s a greasy thang which settles into an awesome groove, full of the kind of jaw-dropping synergy you get every night at a Mule gig. We get some glorious acoustic slide Delta blues and a nasty, foul mouthed Lieber and Stoller junkyard dawg of a thing. We also get a fine cover of ‘Ain’t No Love In The Heart Of The City’ which, while not quite scaling the heights of Coverdale, Marsden and co. is still very good indeed.

We finish with the albums heaviest track, ‘I Asked For Water’ which is a beast of a thing. Menacing, depth charge heavy and that lovely thick guitar tone just oozes. We finish with another classy acoustic track with added footstomps and tambourine. And there we go, a Gov’t Mule blues album and every bit as good as you’d hope it would be. You kinda want it to go on longer, some marathon Mule blues gigs would be great please, or alternatively you could buy the deluxe version which has an extra 8 bonus tracks. It’s Warren Haynes, it’s the blues…nuff said.

Released by Fantasy Records on 12 November 2021 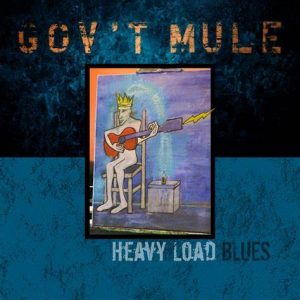