Gotthard‘s second studio release with new vocalist, Nic Maeder is an album of ever unfolding delights. Yet, in the beginning, it finds itself on the immediate downward slide toward Whitesnake territory, not helped by Maeder’s vocal mannerisms. Sacrificing your identity for a second hand template, albeit one cut in the shape of a mega successful band should seem totally alien to a multi-talented outfit like Gotthard. Then, on the third track, ‘Feel What I Feel’, the world changes. That track, plus the next eight might just conceivably be the best work ever laid down on disc by the band. That’s not to say Maeder doesn’t adopt those Coverdale characteristics from time to time, but he keeps it down to a minimum.

They’ve used experienced producer, Charlie Bauerfiend this time round. Better known for his adventures in heavy metal with Helloween, Rage, Saxon and several others, Bauerfiend has clearly encouraged the band to stretch themselves artistically. From ‘Spread Your Wing’s bluesy scat, through ‘I Won’t Look Down’s flirtation with Led Zeppelin to ‘Maybe’s gospel tinged country ballad, all progressively enrich the recording, working upward toward the album’s standout tracks,  ‘Feel What I Feel’ and ‘What You get’. The first, driven by a surging keyboard motif has an urgent, contemporary, grown-up sensibility, like a rock version of Bowie with his head in the stars and his feet on the ground. The second holds a little more to convention, spinning on string driven orchestrations that quickly submit to a landslide of riffs, bass beats, razoring axework and a declamatory chorus. Then, just when you think they’ve run out of new ideas, lapsing into one of those extruded-by-the-yard introductory riffs, ‘Ticket man’ erupts in a wailing, Lennonesque rage against the machine.

For all 62 minutes of Bang, Bauerfeind’s production pulsates with energy and invention, amply providing us with all the muscular, hard punching rock you would expect from the band. But look below the surface and Bang is simply bubbling with unexpected subtleties and meticulously wrought textural detail. Recommended. 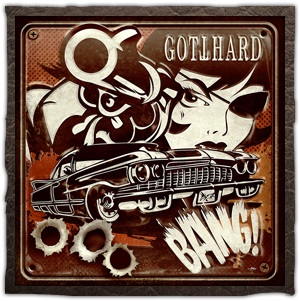