Gorgoroth’s line-up has undergone more changes than Lady Gaga’s wardrobe over the past couple of decades, most significantly when parting company with Gaahl of course. The one constant has been the indestructible Infernus, the Norwegians’ lynchpin and guitarist. Gorgoroth’s latest highly impressive offering, Instinctus Bestialis, is notable as it’s the band’s  first to feature Atterigner on vocals. The Triumfall singer was recruited following Pest’s unseemly departure in 2012, Pest himself replacing Gaahl back in 2008 after his infamous bust-up with Infernus. This resulted in an unseemly legal wrangle over whose claim to the ‘Gorgoroth’ name was the greater. That particular squabble was won by Infernus leaving Gaahl to sail his own ship on God Seed, something he has done exceptionally well.

None of this should detract from Gorgoroth’s place as a significant chapter in the annals of black metal, and Norwegian black metal in particular. Gorgoroth are as big a part of black metal as upturned crosses and burning churches, stemming from their massively influential role in the second wave of bands from the Bergen scene. Other alumni from Norway’s Neolithic corridors of evil include of course the likes of Dark Throne, Immortal and Mayhem. There’s enough stories wrapped up with that satanic bunch to fill a book or two and indeed many scholars of the age have done just that. Read any and the part Gorgoroth have played is clear, right through to their blackened heart, the name embedded as surely as ‘Blackpool’ through a stick of seaside rock.

Gorgoroth’s commitment to the mysterious and the macabre was reinforced just over a decade ago when a show in Krakow saw the black warriors of death joined on stage by a few naked crucified extras, the odd dismembered sheep’s head and more blood than an A&E unit on a Saturday night. While stageshows, image and reputation are all part of Gorgoroth’s heritage, those things alone would not have taken them this far over a quarter of a century. From 1994 debut release Pentagram through to Incipit Satan (2000) and Ad Majorem Sathanas Gloriam (2006) Gorgoroth have constantly been a vital and vicious source of devil worshipping black metal. Their latest album Instinctus Bestialis retains the thundering blasphemous beat that rushes through all of their most potent work.

Atterigner appears to have picked up the baton from Pest with near seamless precision, and nothing has been lost – on record at least – through his arrival and Pest’s departure. His cough of bile that kick-starts ‘Dionysian Rite’ is rotten to the core and throughout Instinctus Bestialis his vitriolic barbs carry sufficient swathes of studded leather to fill a fetish party. The overall effect is one of controlled mayhem with just enough grasp on the reins from Infernus to prevent the whole nightmare soundscape spilling over into a bloodbath.

Within the horror lies beauty, such as the sweeping start to ‘Ad Omnipotens Aeterne Diabolus’ although once the door is nudged open, Gorgoroth’s demonic deliverance quickly overwhelms once more under a thunderous cacophony of riffs accompanied by cries of ‘Hail Satan!’ from Atterigner. The tempo never drops and Gorgoroth sweep through all eight tracks in just over half-an-hour. Songs like ‘Rage’ and ‘Kala Brahman’ are pummeling portrayals of snarling savagery while the haunting ‘Awakening’ oozes dark juices of evil. The Gorgoroth story continues. 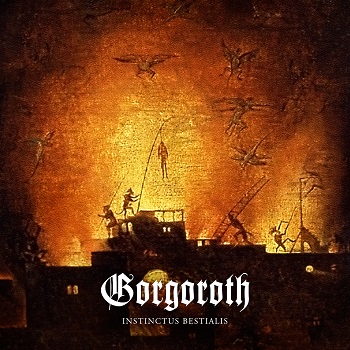