Tickets for Goo Goo Dolls’ first visit to the UK/IE since February 2020 go on sale today, Friday 16th December at 10 a.m. HERE. The tour kicks off in Dublin on June 13th 2023 and includes a show at London’s O2 Academy Brixton on June 24th. 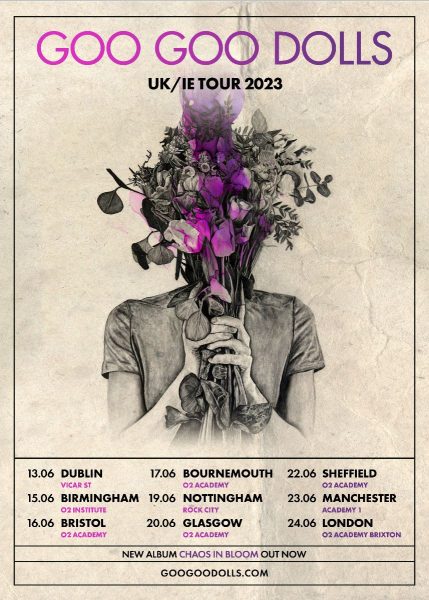 Singer John Rzeznik said “Hello everyone we are excited to be heading back to the UK and Ireland for the first time in over 3 years!  Robby and I can’t wait to see all your faces again!”

With more than 30 years together as a band and over 12 million albums sold, four-time GRAMMY-nominated rock band Goo Goo Dolls released their 13th studio album Chaos In Bloom earlier this year. As the first record of their career to be produced by frontman John Rzeznik, Chaos in Bloom found the band continuing to evolve artistically as they have over the last four decades together. Listen to the album HERE and check out the videos Yeah, I Like You” and “You Are The Answer”.

Rzeznik streamed a live performance earlier this week for iHeart Radio in Los Angeles, you can view highlights HERE.

This year also saw their indelible smash hit “Iris” officially eclipse 1 billion streams on Spotify as well as being the BBC’s most streamed song from 1998.