“We live in a nation where governments destroy freedom, the press destroys information, religion destroys morals, and our banks destroy the economy.” So opens City of Dust, the debut album from Tucson, Arizona-based sludgecore outfit Godhunter, a sample of a speech by Nishan Panwar played over ominous bass feedback. Excerpts from speeches with strong political messages are far from uncommon in modern music, but with Godhunter, it’s quickly established that they are deadly serious. One look at the liner notes confirms that: indicators littered throughout the lyrics point the reader to fairly extensive footnotes elaborating on references to political corruption and incompetence in Arizona, and wider social and environmental breakdown, not to mention a recommended reading list related to those topics. Some listeners might feel they’d rather be left to interpret the songs themselves, but for Godhunter the most important thing about their message is that it’s clear.

Opener ‘Despite All’ unfortunately doesn’t deliver it with the immediacy you might expect from such an introduction: it begins with a suitably deathly slow Sabbath-esque riff, tightening up to a mid-tempo march. There’s no compromise in frontman Charlie Touseull’s leading roar of ‘This place means the world to me, / this place will be the death of me’, but the chugging behind it lacks the drive you might hope for. Godhunter have certainly got the goods to pull it off, too: ‘Brushfires’ is full of nothing but sublime stoner metal riffs one after another, leading to a slow pounding section over which Touseull growls, ‘Fire On High, The Hills Are Burning’, painting an aptly bleak picture of the state of the world.

City of Dust also sees the quintet taking on more diverse arrangements and feels than their straight-up stoner EP. ‘Snake Oil Dealer’ is given dramatic power from synth strings, breaking down to a positively damning riff that unfolds to the sounds of crackling fire, frogs and howling wolves, before segueing to ‘Shooting Down The Sun’, where Touseull sings a doleful lament over solemn acoustic guitar and gentle strings. The climactic closer, ‘Plague Widow’, shows further attention to detail when it fades out a steady, heavy riff with synths to end the album with a kind of mournful musical question mark over the future of the world.

Such a moment reflects Godhunter at their best on City of Dust, as it’s where the music is most powerful that their message is comes through the most salient. The aforementioned finale is a 10-minute sludge metal epic that’s both heavy and sad in equal measure, while the title track, screaming ‘Wars change, people die, the Lord remains in the City of Dust’, paints a chilling picture of the world over a justifiably dark string of riffs. By the same equation, underwhelming tracks such as ‘Palace of Thorn’ somewhat defang the apparent rage that Godhunter feel. Though City of Dust may be a flawed gem in that respect, the reality is that anyone as serious as Godhunter are bound to only do better. 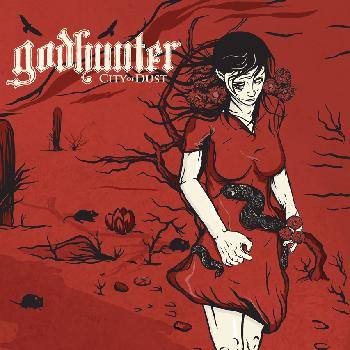