By most metrics, Seventies Canadian power trio, Goddo were failures. When you’ve been dropped by a thin skinned label (Polydor) after releasing three albums that didn’t sell especially well, you can’t really claim success. But the notion that they should’ve and could’ve is hard to deny here. At times, the invention, ambition and musical craftsmanship that underpins these three remastered albums is breathtaking. Proof indeed that even when Rock Candy Records drills down into the unfashionable, they can uncover some real gems.

The Seventies never really embraced the Power Trio in the same way that the Sixties took to groundbreakers like Hendrix, Grand Funk, Taste and others, so maybe it’s no surprise that none of these albums were a resounding success. As we say so often at MR, it’s all about timing.

It’s evident from the self titled debut (1976) that the trio, led by the enigmatic Greg Godowitz, were a clearly determined bunch. The clanging guitars, primal riff, and on-the-money rhythmic crunch of ‘Bus Driver Blues’ are perfect datenight matches for the bluesy, ragged edged rock of ‘Drive Me Crazy’ and the cowbell crazy, Thin Lizzy-esque, rock’n’roll lifestyle commentary of ‘Let The Lizard Loose’. And much of this sounds like it evolved from an elongated jam session, in which the inspired passages were written down and given their own 3 minute moments in the sun.

All that said, the album pivots around two central tracks. The trio tighten the riffs and the rhythms for the torqued up garage rock of ‘Let It Slide’, and then smooth out their mood for the superb ‘Under My Hat’, a summery sounding mix of Boz Scaggs and the Young Rascals. Two tracks that could have graced any upwardly mobile seventies’ rock album.

Two years later, the comparative sophistication of Who Cares showed us how far the band had come.

Who Cares and Act Of Goddo reviews follow tomorrow, 1 July 2019. 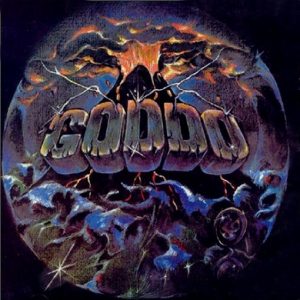