Although they hailed from Ontario, Canada Goat Horn had a distinctly English sound. In fact, you could pinpoint their sound to the Midlands and the North East: Cathedral, Raven and Venom are all evident in the band’s sound and it captures that magical moment when the NWOBHM was morphing into something more extreme. Collecting their three studio releases along with a host of rare bonus tracks Voyage To Nowhere: Complete Discography should garner Goat Horn some long overdue respect.

Formed in 1999 Goat Horn’s career got off to a stuttering start but when they recorded their debut album 18 months later, they certainly weren’t procrastinating. Put to tape in a single day Voyage To Nowhere is a raw and visceral document and they don’t come much more virulent than opening cut ‘Goat Horn’. Full of doomy chords, thunderous drums, and a bowel-loosening bass rumble ‘Goat Horn’ was a mission statement that succinctly set out the band’s stall. In an era when metal was at a commercial ebb this was a horns held high, denim and studded leather celebration of all that was good and heavy. The first thing you’ll notice about this album is the predominance of the riff and it’s not until we hit third track ‘Eternal Quest For Eternal Happiness’ that we get a substantial guitar solo. This focus on the riff makes for a weighty sound and ensures Goat Horn really pack a punch.

Just as the NWOBHM was an amalgamation of metal and punk then so is Voyage To Nowhere. You can definitely hear a hardcore influence (think Misfits and SNFAU) not only in the album’s roughhewn nature but also in the sheer velocity of tracks such as ‘Shattered Dream’. However, doom metal is what Goat Horn do best and the title track features guitars that almost cry in pain and the whole song is a megalithic monster that drags itself along like a wounded Golem. Bringing the album to a fitting conclusion is the aptly titled ‘Doom March’, an instrumental which creates a discombobulating soundscape and it’s one that’ll stay with the listener long after the disc has stopped spinning.

At just 33 minutes Voyage To Nowhere is a fairly brief listen but that’s been rectified by the addition of 4 bonus tracks. A mixture of live and demo cuts they expose the dirt beneath the fingernails, which is exactly how Goat Horn should be heard.

By the time Goat Horn recorded their sophomore album they were firmly on a roll. Taking all that was great about their debut and adding a touch of experience and maturity made Storming The Gates a more rounded listen. Like a fish with hook in mouth the riff that permeates opening track ‘Gates Of Oppression’ immediately reeled me in and held me captive for six spellbinding minutes. A bigger budget and additional studio time could have diluted Goat Horn’s street-boy charm but I’m pleased to report they play with a confidence that comes from a band who know they’re on to a good thing. The riffs are bigger, the production more bombastic and the drums hit harder all of which conspire to give Goat Horn added oomph.

Storming The Gates found Goat Horn expanding their palette and introducing classical elements into their sound (‘Storming In’ could be The Great Kat on amphetamine) while ‘Fortress Doomed’ has a proto-black metal feel (think Mercyful Fate). But Goat Horn have always worn their influences on their collective sleeve and a ferocious cover of ‘Re-Animation’ makes a welcome appearance. Originally written by Canadian thrashers Sacrifice ‘Re-Animation’ gets filtered through the band’s sensibility, comes out sounding like Kreator, and doesn’t seem out of place amongst the Goat Horn originals. Featuring some fine shredding from guitarist Brandon Wars ‘Fate Strikes’ makes for a fine closer and set the bar extremely high for their next release.

Included amongst the four bonus tracks is a live version of Helloween’s ‘Heavy Metal (Is The Law)’ which brings this second disc to a soaring conclusion and makes this disc the definitive version of Storming The Gates.

Released as tensions in the band reached boiling point the six-track EP Threatening Force was to be Goat Horn’s final studio offering. Sometimes a sense of pressure within a group can act as a catalyst and spur artists on to produce some of their best work or it can signal a death knell. In the case of Goat Horn, it proved to be the latter and Threatening Force was akin to their last rites. That’s not to say that this is a poor release, far from it, it’s just that when held up to the previous albums it falls short. The main problem here is that this release sounds too clean and no more so than with Jason Decay’s vocals. His gruff growl has been replaced with a falsetto and, like Samson losing his hair, is devoid of any power. While the song writing is up to scratch, a thin and meek production doesn’t help and songs such as ‘Right Heavy Metal’ are left sounding…cheesy.

Paradoxically, it’s the six bonus tracks where this disc hits pay dirt. These demo cuts are suitably gnarly; rough around the edges and full of vim and vigour they’re everything you’d want from Goat Horn. While they don’t have the polish of Threatening Force that works in their favour; sometimes it’s better to have a little dirt under the fingernails. Of particular note is the 10-minute ‘Condemned’, a Cathedral-like dirge that could quite easily trade punches with Black Sabbath. Now, if these six demos had made up the EP it really would have been threatening.

Goat Horn split after this release and while they reformed sporadically throughout the 2010’s they never recaptured their former magic. Documenting one of this century’s best metal bands Voyage To Nowhere: The Complete Anthology is Goat Horn’s proud legacy. 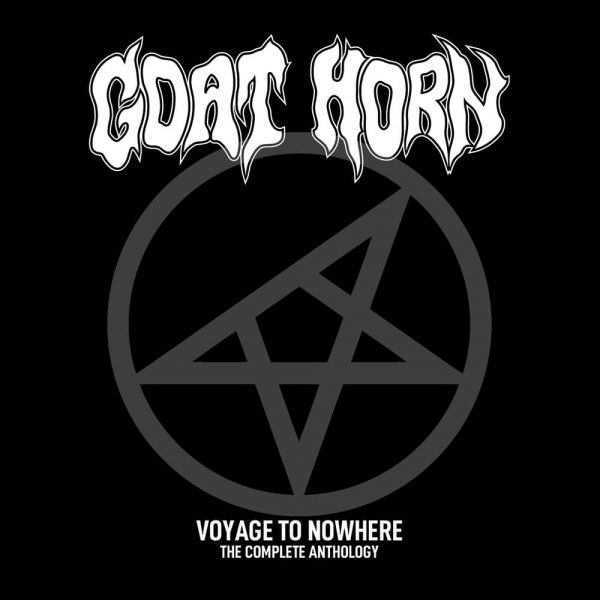