1984 was a time of transition for Girlschool (a year from which both of these live sets were culled) with line-up changes and a shift towards a more commercialised sound that confused their core fanbase. The pop-metal of 1983’s Play Dirty was a creative nadir yet in the live environment Girlschool were an unstoppable beast and if you need proof just listen as they tear up stages From London To Nashville.

When Girlschool hit the Camden Palace in late ‘84 they’d swelled to a quintet with the addition of second vocalist Jackie Bodimead while original guitarist Kelly Johnson was replaced by Aussie Cris Bonacci. Despite these changes opener ‘Let’s Go’ remains a carrion cry and it’s delivered with such conviction that you have no choice but to heed the call. There’s a groove and swing underpinning proceedings, so much so, that the band collectively turn into a wrecking ball that’s come to demolish the venue. On stage tracks like ‘Nowhere To Run’ and ‘Play Dirty’ become infinitely heavier and deliver the melodic sensibility of Kiss with the hefty punch of Motörhead. The energy Girlschool radiate is reflected right back by a rabid crowd with each egging the other on towards greater levels of intensity.

At the behest of their record company Girlschool polished their look and sound and while Jackie Bodimead doesn’t detract anything from the band, she does seem surplus to requirements (Kim McAuliffe is a perfectly good singer) and the keyboard motifs she adds to the new tracks are (thankfully) largely drowned out. But whatever the line-up ‘Hit And Run’, with it’s tough swagger, never gets old while ‘Out To Get You’ has a riff so arresting it should be illegal. Girlschool deliver a set that ebbs and flows perfectly with drummer Denise Dufort and bassist Gil Weston combining to create a hefty rhythm section that adds the requisite clout and by the time we reach closer ‘Emergency’ we’re left feeling slightly dazed and punch drunk.

Sometimes in rock n’ roll the stars align and everything falls into place and that was certainly the case when Girlschool hit Nashville in the Orwellian year of 1984. Featuring the classic line-up of Dufort/McAuliffe/Johnson/Weston the band take to the stage to the strains of ‘The Sound Of Music’ (really!) before all hell breaks loose with ‘Screaming For Murder’. Kelly Johnson’s guitar work deserves special mention; she’s all over the fretboard like a rash and delivers explosive solo after explosive solo and most notably on ‘Out To Get You’. The rather lightweight ‘Running For Cover’ lets the side down slightly but things get right back on track with a rumbustious ‘Demolition Boys’ which threatens to shake the venue to its core.

On the strength of this recording, it’s bewildering as to why the band felt like they had to Americanise their sound because this capacity Nashville crowd seem adhered to Girlschool’s no nonsense brand of rock n’ roll and, putting a quintessentially English twist on ZZ Top’s ‘Tush’ only makes the bond stronger. Two more classic covers are served up as encores, firstly a gender-bending version of T-Rex’s ‘20th Century Boy’ (on which you can almost see the speakers smoking) and then a turbo-charged run through of Gun’s ‘Race With The Devil’. The latter has been covered by a multitude of artists but Girlschool’s is the most definitive and, still in the band’s live set to this very day, makes for a fine way to close this collection.

Formed in 1978 and pivotal in the formation of the NWOBHM much was made out of Girlschool being an all-female band in a masculine domain but, truth be told, they could always out-rock the men and the evidence is right here in From London To Nashville.

CD1: Live From The Camden Palace 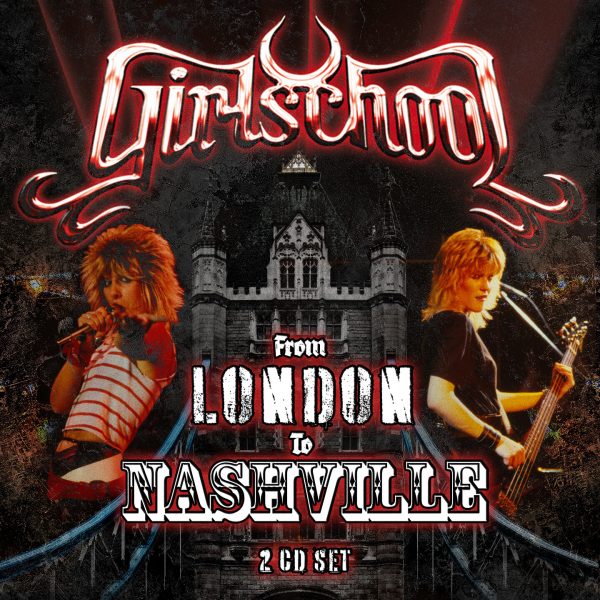