By the time 1982 rolled round George Thorogood And The Destroyers were at the peak of their powers having just invaded the charts with the Bad To The Bone album and single.  Live too, they were a hot ticket and Live In Boston, 1982: The Complete Concert is here to tell you what all the fuss is all about. Originally released by Rounder Records in 2010 Live In Boston is now bolstered by 12 previously unreleased tracks.

George and band arrive with little fanfare and launch into the high octane rock n’ roll that is ‘House Of Blue Lights’. Turning every night into Saturday night The Destroyers have a highly addictive sound that demands you shake your tush and a lively ‘Bean Town’ crowd seem well up for it and the pairing make an explosive combination. It’s straight into the instrumental ‘Kids From Philly’, a George Thorogood original that’s heavy on the sax and hard on the pedal and is primed to raise the roof. The circular riff of ‘Who Do You Love?’ teases the crowd before a no-holds-barred ‘I’m Wanted’ finds the audience in fine voice. A jittery ‘Cocaine Blues’ is country and western…only played whilst on amphetamine which only serves to highlight the slow and sultry nature of the following ‘One Way Ticket’.

Live In Boston is a warts-n’-all recording but to tell the truth there’s very few warts on display as the band lock in tightly. An extended ‘One Bourbon, One Scotch, One Beer’ finds drummer Jeff Simon and bassist Bill Bloush providing a solid anchor while Hank Carter’s sax provides a counterpoint for George’s guitar. Even back in ‘82 Thorogood’s vocals had the whiskey croak of a wise old bluesman and it’s put to good use on the whimsical ‘As The Years Go Passing By’. Chuck Berry’s ‘It Wasn’t Me’ has never sounded so exuberant as the version that’s currently bouncing around my speakers. ‘Night Time’ is a real bruiser, a punchy affair, that doesn’t let up and is paired with the equally effervescent ‘New Boogie Chillun’’ which brings the disc to a rather toe tapping conclusion.

This is a full two hour (plus) show and the band show no signs of flagging as their set ebbs and flows perfectly with ‘I’ll Change My Style’ opening the second disc in a rather wistful fashion and provides a fine launch pad for the high velocity rocker ‘Miss Luann’. As you’d expect ‘Madison Blues’ lights the touch-paper while ‘Can’t Stop Lovin’’ sets the venue aflame and in between we’re dealt ‘The Sky Is Cryin’ which is heavily laden with slide guitar. Introduced by some good natured ribaldry ‘Same Thing’ features plenty of audience participation and sets things up nicely for ‘Bad To The Bone’. Used in countless movies and adverts ‘Bad To The Bone’ has a life of it’s own but the live environment is its natural habitat as it struts its bad self around the venue.

Live In Boston is a very visual album: you can almost see the ceiling perspiring as a thousand sweaty souls cram the dance floor while George and the boys crank out a lively version of ‘Move It On Over’. Like a ball bouncing perpetually between two walls ‘Nobody But Me’ has a distinctly British Invasion feel before we’re hit by the pure Americana of Chuck Berry’s ‘No Particular Place To Go’. ‘Ride On Josephine’ is extended to eight glorious minutes and allows the band to display some of their musical dexterity. Well into the sets third hour and George Thorogood still manages to pull more from the tank as he revisits the Chuck Berry songbook for a raucous rendition of ‘Reelin’ And Rockin’’ which, plenty of buzzsaw guitar and screeching sax, brings down the curtain in fine style.

Recorded at Boston’s Bradford Ballroom on 27th November 1982 Live in Boston still sounds fresh and if  you need evidence of why George Thorogood And The Destroyers are so highly valued in the world of rock n’ roll it’s all here in The Complete Concert. 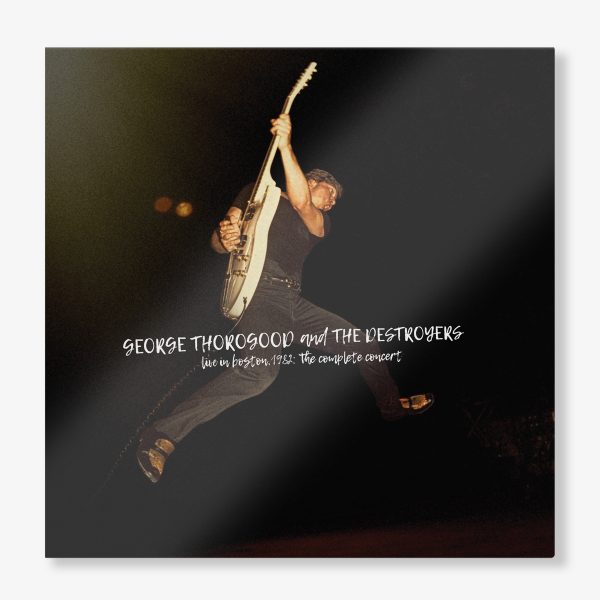