It has been a fair few years since Genesis were a working band, whether live or in the studio, after all their last sustained bout of shows was in 2007, and their last studio album was the ill fated Calling All Stations, released in 1997. It was originally thought their ‘Turn It On Again’ tour in 2007 would have been their last, but now we finally have the ‘Last Domino?’ tour, originally announced in February 2020, postponed twice since, for obvious reasons, but finally opening at the Utilita. This was the third of the three Birmingham shows, and by showtime there weren’t many empty seats.

It was a fairly straightforward stage set up, with a huge screen behind the band and a highly mobile and versatile lighting rig, with five rectangular units you could almost mistake for giant dominos, probably not a coincidence. As the house lights went down, and an intro track of the opening instrumental part of ‘Duchess’ came over the PA, the band walked on as a unit to a standing ovation. There was no ceremony, the band went to the marks and straight into ‘Behind The Lines’. Apart from the three stalwarts, Tony Banks, Mike Rutherford and Phil Collins, the current line up is augmented by Daryl Stuermer on guitar and bass, who’s played with the band since Steve Hackett left, Phil’s son, Nic, on drums, and two backing singers, Patrick Smyth and Daniel Pearce, who also doubled on percussion. Nic Collins is a fine drummer in his own right, looking as if he genuinely belonged in this arena. Phil’s continuing health issues meant he had to sing from a stool at the front of the stage, and when he did move, had to walk with a stick. His voice was a bit harsher than in his heyday, and a quite a few tones lower, but as the gig went on he was clearly warming to his task and he sounded much better.

There’s always been a tension between the band’s illustrious and hugely influential Prog days and their later years, but this set had a pleasing balance between the old and the new, with, for example, more songs played from Selling England by the Pound than from We Can’t Dance, although the early part of the set was dominated by newer songs. After the opener ‘Turn It On Again’, ‘Mama’ and ‘Land of Confusion’, accompanied by a film combining the empty streets of the lockdown with platoons of marching, faceless but bowler hatted figures, had most of the crowd roaring, before the band took it in a different direction with ‘Home by the Sea’ and it’s lengthy instrumental coda, ‘Another Home by the Sea’. 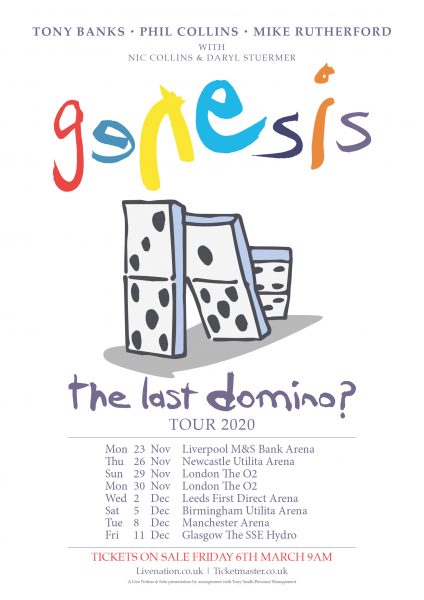 There was a bit of a breather then, as Collins sang the poignant ‘Fading Lights’, before the first intrusion of the Gabriel/Hackett years as with the instrumental section of ‘Cinema Show’, which had a big reaction from some parts of the crowd, which heightened when it moved into the emotional and melancholy ‘Afterglow’, a real high point of the whole show. After this the band gave us a semi-acoustic section, which, as Phil took pains to explain, involved Tony Banks playing on his right and Daryl Stuermer and Mike Rutherford playing on his left for the first time in 50 years. After opening this with ‘That’s All’, they also included ‘The Lamb Lies Down on Broadway, which induced some baffled looks in some parts of the crowd, but these were immediately dispelled by ‘Follow You, Follow Me’, again drawing a huge cheer and singalong.

The stage was returned to normal for ‘Duchess’, ‘No Son of Mine’, which was played a lot heavier than in previous years, which did tend to make it sound a little pedestrian compared to other parts of the set, and then ‘I Know What I Like’, where Phil repeated his infamous tambourine solo, although this time from a seated position. After his audience participation section, ‘Domino’ was the opportunity to put the lighting rig through its paces, although this was another song that plodded a little, where it really needed to dance, but the band were hitting the finishing straight by this time, filling the last part of the set with hit singles. ‘Throwing It All Away’ was accompanied by clips from the whole of the band’s career on the big screen, ‘Tonight, Tonight, Tonight’ had the crowd in full voice, and ‘Invisible Touch’ ended the main set with a flourish.

Obviously there were encores, beginning with ‘I Can’t Dance’, then perhaps surprisingly, they ended the show by returning to the Prog glory days. A brief touch of ‘Dancing With The Moonlit Knight’, then even more surprisingly, the farewell song was ‘Carpet Crawlers’, from The Lamb… It would be fascinating to know why this was, rather than one of their big singles (no ‘Abacab’, for example). An acknowledgement of the fans who’d been with them since the Gabriel and Hackett days, perhaps?

That was the end of over two hours of quality music and a lesson in how to put an arena show together. The whole band took a bow, then the others departed while the three Oldest Members took a fitting bow on their own. If this is really the end, and while Phil Collins is quite emphatic that it is,  there are some rumours that Tony Banks feels they could go on, it was a fine way to depart, paying attention to all the aspects of their music and career and finishing on a genuinely high note.