Noted as an award-winning drummer for progressive rock bands such as The Pineapple Thief, Porcupine Tree and King Crimson, Gavin Harrison’s credentials stretch much further afield, from the diversity of Lisa Stansfield through to Iggy Pop, more likely bedpartners in Level 42 and Go West through and at the heavier end of the market, Fates Warning. 25 years ago, he released his own solo album, Sanity & Gravity, copies now fetching considerably high prices. It’s now been remastered, and due to become widely available again in a variety of formats, featuring an additional bonus track and new cover artwork.

Drummers’ albums aren’t always well thought of in the rock field. Much as we often admire them as a band’s engine room coupled with their often upper-body gymnastic flexibility visually, its still when they solo that we’re most likely to inspect the plumbing at a concert. Yet, for every unsold copy of Two Sides Of The Moon by The Who’s late drummer there’s someone who will rave fanatically over Billy Cobham’s Spectrum.

The days of the wild man of rock being a drummer are long since gone, however. Moon and Bonham died so long ago, we’re often more familiar with their legends than their music, that having built the template for such behaviour, Ginger Baker outlived them is a miracle you can’t explain scientifically. Then, Baker was a rock drummer by default, he was really a jazz drummer with a remarkable affinity for African tribal rhythms.

The jazz field afforded a lot more respect for skins-men, the likes of Art Blakey and Tony Williams fronting their own well-respected bands. Then, of course, there was the advent of jazz rock, its popularity as much down to Billy Graham putting such acts on as support at the legendary Fillmore, as Miles Davis pioneering the way musically. Offshoot members of such material formed their own bands, and in the 70s, the likes of Weather Report, Return to Forever, and The Mahavishnu Orchestra playing stadiums and charting with album releases. In so doing, the music was diversifying further becoming jazz fusion.

Fusion, however, soon amalgamated into another aspect of progressive rock. Brand X aside, the likes of Camel and Yes all dabbled in jazzier areas, until as the myth perpetuates punk blew a Molotov cocktail into the proceedings. Ignoring the diverse changes popular music took thereafter, progressive rock is now generally considered acceptable if not arena-filling, and the fields of jazz rock and fusion feature a diverse range of performers who fill a comfortable niche.

His feet in both camps, and a few others besides, Harrison, opted not to go for the vainglorious route of virtuoso tub-thumping on his first solo release. “When I was originally faced with the prospect of making a solo drum album, I decided I would take a more experimental approach to playing my instrument,” remarked Harrison. “I felt there was a way to express emotion from the drums played from a more melodic point of view and compose in a way as if I were playing an instrument like a piano.”

To that end, he concentrated on groove and melody, calling upon others to help flesh that out.

“I was extremely happy to collaborate with so many of my favourite musicians and that they would be open minded and sympathetic to the experimental approach. This record made so many of my rhythmic and melodic dreams come true,” he recalled.

Thus, he brought in former members of Japan in Mick Karn and Richard Barbieri (the keyboard player also being a member of Porcupine Tree alongside Harrison), while Level 42 compatriot Jakko Jakszyk added guitar (the pairing also being members of King Crimson). Also, among those entering the frame, was Dave Stewart, keyboard player with more out-there progressive bands such as Hatfield & The North and National Health but had sidestepped into the mainstream during the 80s with a series of collaborative hit singles.

The result as new listeners will find for themselves is a cohesive collection of mainly instrumental working, sometimes oddball yet with a danceable quality. Compelling in their musicality that they avoid the muzak route, and often more suitable listening to as a leisurely workout at the gym than adventurous background music during a dinner party.

This is suitably apparent with opening track ‘Aim’ where Harrison is the first musician heard, present but not overtly conspicuous. For that, we rely on the funky groove of a warbling bass, its signature riff alternately ending with a most extended bend or harmonic ping. This is presumably the late Mick Karn playing fretless.

The overall effect is as if Jamiroquai were doing a Weather Report track. There’s a mild diffusion of ideas three-quarters through where you’re not sure if they are heading for the orient or a fairground but it soon returns to the groove, adding freakier keyboards, horns, violin and bird sounds and no doubt sympathetic kitchen sink too, in an understated but persuasive manner. This is funky jazz, man.

Offbeat percussive elements, echoed effects and weirdness build as a syncopated sparse keyboard sets a loose melody, with the following ‘On A Wave Of Positivity’. The various instruments seemingly knowing where they’re going even if the listener remains unsure. This isn’t random, there’s purpose., loose as it is, and getting prettier in sound as it nears end.

Tripping with purpose, effects, and percussion mesh sonically, as a beefier Wal bass funks up, on ‘Dog Day’. Weird voices sing or scat something either foreign or made-up. it’s like Gong’s Daevid Allen met up with Zappa to play world music, then got Steely Dan’s Donald Fagen to play a classical piano solo in the middle- Explorative, weird but mellow, they haven’t grown the kind of hash to take you here in over 40 years. Five minutes in, it goes into a more mainstream jazz rock sound, albeit briefly. You feel there’s some whacked out cartoon that ought to be made to accompany this one. ‘A Place To Stay’ proves smoother even as the squeaky keyboards play in a wandering Weather Report manner, where the space between the instruments as important. A jazz guitar enters and develops a linear melody solo, even as keys and drums play in a kind of sympathetic opposition.

Four tracks in, I can hear, but more appropriately feel, what Harrison is adding, indeed composing, rhythmically throughout. Its sympathetic, sometimes challenging, dextrous, very listenable.

With ‘Witness (for Bobby)’ one’s unsure if you’re in outer space or standing in a cathedral initially. It resonates, both pastorally and with more Avant Garde scrapes of a violin, while a voice could be calling us to prayer at a minaret that when we get there is a smoky basement jazz club. It builds, the bass more solid in foundation, horns more vibrant and inquisitory at which point the music’s style suggest a crime fiction setting. This is followed through a little with ‘Dearest Blood’ that’s mainstream late night L.A. jazz by way of a detour via Return to Forever, with a most captivating acoustic guitar solo weaving its way in and tangling you up in knots. There’s also what I’m possibly misconstruing as an Asian voice, possibly higher pitched male rather than female but don’t shoot me if I’m wrong you modern mutilated-labeller types, all I’m trying to say is it suits the mood.

There’s a mellow eerie warmness as piano pays out the theme in ‘Sonata in H’, percussion gently pushing it along like waves moving pebbles on a beach. My late father-in-law played keyboards semi-professionally in jazz trios and solo, and I like to think he’d enjoy this track. Choice chords play in variation over an atypical jazz rock mood for ‘Big News For A Small Day’ where again there’s that detective genre mood feel, but more an 80s movie that ultimately becomes a warmer more vivid romance.

The brief ‘Witness (Reprise)’ possibly closed the original album, a bumpety bass line, with innocent laid out keyboards and mildly quizzical and prodding percussive sound underlying the piece. With this new collection we have a bonus track in ‘Iron Horse – It’s upbeat, varied mainstream jazz rock, atmospheric and demanding of your ears’ attention; the gentle rolls and differing weighted strikes of sticks-on-skins and the barest of solos show what Harrison brings to the table, but he does this from start.

Overall, there’s a smoothness here to Sanity & Gravity. It’s as if some of the principal players of 70s jazz fusion ended up in a recording studio with Ted Templeman and Michael Omartian a decade or two later, but still feeling fresh.

It’s an ensemble work as a whole. Harrison accenting the changes. Atmospheric, harmonious, the music is clever but played as if were easy listening. It’s not and it’s not boring, Indeed its often oddball musical behaviour plays out in in a warm sensual manner. 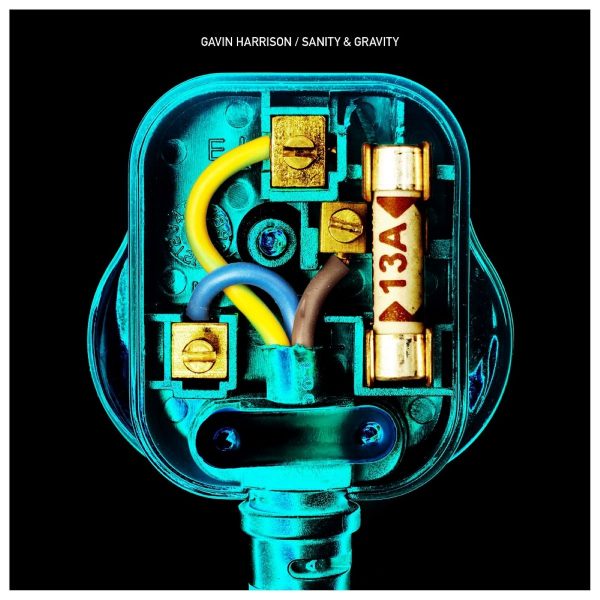