Bittersweet, that’s what this is. Look the word up in the dictionary and you’ll see a picture of the album cover of this posthumous release from the late, great Gary Moore. ‘Live From London’ was recorded in 2009, a mere 14 months before his untimely death at the ludicrous age of 58. It captures Mr. Moore in full flow in his ‘blues phase’ prime in the intimate confines of London’s Islington Academy.

And there’s no time, apparently, to ease us into the evening. Moore rips into ‘Oh Pretty Woman’, his guitar echoing around the hall. Barely a minute goes by before we’re into the first solo and another follows about a minute later. You can only imagine the amount of gurning occurring as he shreds into this.

Yes, this is a blues gig and yes, John Mayall, Paul Butterfield and Peter Green are the major touchstones on display here but there is a refreshing variety to the evenings setlist – Moore leaves no blues style untouched. ‘Down The Line’ is furious Country Punk, essayed at breakneck speed – ambulance chaser lawyers will be calling you up after listening to this, desperately trying to secure a whiplash payout.

The pace finally drops for the first slow blues of the evening and it’s a smorgasbord of classic blues licks and tricks. Now I’m no guitar expert but it’s all here – the loud thing, the quiet thing, the stop/start, the really fast thing, the fuzzed out roar and the widdly thing, plus beautifully held notes and tone to die for (more about this later). It’s stunning stuff. he never repeats himself or goes for the easy option. It’s a masterclass is what it is and you can also, if you listen closely enough, hear the sound of several thousand jaws collectively hitting the floor.

Moore breaks out the slide for ‘The Mojo (Boogie)’. Although it’s slide guitar as played by 80’s action heroes – big, raw, thuggish yet surprisingly soulful. Budding guitarists in the crowd (of whom there will have been many) must have been in a state of ecstatic despair

Oh, and speaking of soul, the next long (12 minutes) slow blues is a take on a 1973 Donny Hathaway track. Brave is the singer who tries to cover Mr. Hathaway and walk away unbowed, but hey, Moore pulls it off and then some. it’s a vocal showcase…until that guitar weighs in. I present Gary Moore, conclusively proving that he’s a bona fide bluesman. Nothing short of supreme.

You sense that Moore knows that he’s proven his point and for the rest of the gig can just relax, kick out the jams and party. Shredder Gary briefly kicks the doors down and roars through a trio of riotous boogie dust ups. Then the heavy artillery arrives. ‘Still Got The Blues’ is drenched in that beautiful ringing tone and is that rare beast, a classic that manages to best it’s recorded counterpart. Moore clearly feeds off his audience, his setting, his stage.

It all ends, as it must, with ‘Parisienne Walkways’ and THAT note. And there it is, beefed up and fuzz-loaded, in all it’s technicolour glory and mind-boggling length – Moore gives you plenty of time to go to the loo, grab a drink…maybe grow a beard. and then he flies once more, a man in total command of his instrument and his craft. A perfect moment preserved in amber. And the last thing you hear? A small, happy giggle as he walks offstage.

‘Live From London’ is a stunning, moving testimony to a towering talent. There’s not a sign of illness or fatigue – Moore never phoned in a performance and always left everything out there on the stage. Many guitarists have adapted his full-on rock/blues fusion (you know who they are, they know who they are) but no one did it quite like Moore. he bridged the gap between Clapton and Green and the full on rock assault of his peers and colleagues (Lynott, Lemmy et al.).

And that tone (I said I’d mention it again). It’s a very…male sound. Aggressive, bullish, competitive, in your face. It’s the natural progression and logical conclusion of Clapton’s “woman tone” (and yes, I know I just said it was a male sound – so sue me), hell,it’s the biggest swinging dick in the room. But, like a tough guy who cries into his beer, there is also a great deal of hard won sensitivity, it’s a ‘nightclub bouncer with a soft spot for puppies’ tone. Despite being technically dazzling there’s an extraordinarily powerful sense of emotion that many of his disciples just don’t get or can’t reach. He was a bluesman. Listen, remember, rejoice and raise a glass or two.

Released on 31 January 2020 by Provogue Records 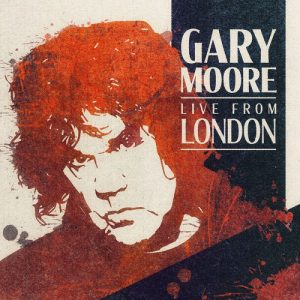